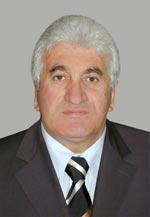 Mr. Mouradyan graduated with a degree in civil engineering from the Yerevan Polytechnic Institute in 1975.

From 1975-1981 he worked as a construction skilled worker and later team leader in the Gyoughshin Trust # 7 in the Martouni region. For the next six years he was the head of the Reconstruction Office under the Executive Committee of Martouni Regional Council. From 1987-1990 he was the director of the Industrial Complex under the Executive Committee. From 1990-1998 he was first the head of the Tavagyough Village Council and later head of the community.

1999-2003 was his first term as a deputy of the NA (electoral district # 42) and he was on the NA Standing Committee on State and Legal Affairs. He was first a member of the Stability Deputy Group and later the “People's Deputy” Deputy Group.

Mr. Mouradyan is married and has four children.