From armeniapedia.org
(Redirected from Gulbenkian Foundation)
Jump to: navigation, search 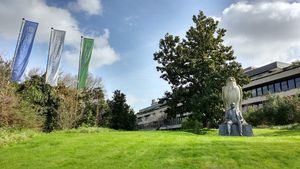 Gulbenkian Statue with Foundation building behind 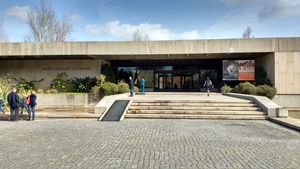 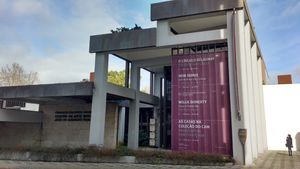 The Calouste Gulbenkian Foundation is a Portuguese private institution of public utility whose statutory aims are in the fields of arts, charity, education and science. Created by a clause in Calouste Sarkis Gulbenkian's will, the Foundation's statutes were approved in 1956.

The head-office is located in Lisbon. The large premises, opened in 1969, comprise the head-office itself and the museum. In addition to the areas occupied by the Foundation's management and various departments, the premises include a large auditorium, a space for temporary exhibitions, a congress area with auditoriums and other rooms, as well as a large building that houses the Calouste Gulbenkian Museum and the Art Library. The entire complex is set in the Gulbenkian Park. In 1983, the Modern Art Centre, consisting of a museum and an education centre, was opened at one end of the park. The Instituto Gulbenkian de Ciência is situated inside a multi-building complex in Oeiras. The Calouste Gulbenkian Foundation also has a delegation in the United Kingdom (UK Branch) and a centre in Paris (the Calouste Gulbenkian Cultural Centre).

The Foundation actively pursues its statutory aims in Portugal and abroad through a wide range of direct activities and grants supporting projects and programmes.

The Armenian Department states its mission as being to create a viable future for the Armenian people in which their culture and language are preserved and valued.

To this end the Department has identified four priorities:

THE CATHOLICOSATE AND THE GULBENKIAN FOUNDATION TO PUBLISH CHILDREN'S BOOKS

His Holiness Aram I and the director of the Department of Armenian Affairs of the Gulbenkian Foundation have initiated a project of publishing a series of books in the field of children's literature.

A special plan will be drawn out for the execution of the project and a committee of professionals will oversee the works. Further details will be provided in the future.