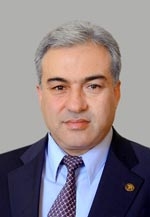 Gagik Mkheyan was born on February 2, 1955 in Yerevan.

Mr. Mkheyan graduated from the Yerevan Polytechnic Institute in 1981. He is an hydro-technician engineer.

From 1972-1974 he worked in the Yerevan Cable Factory. He spent the next two years in the Soviet Army. From 1976-1981 he worked as a technician and later engineer in the Yerevan Cable Factory. The next nine years he spent first as an engineer-inspec-tor and later head of the Organizational and Instruction Department in the Capital Construction Department of the Executive Committee of Masis Regional Council. From 1993-1994 he was the head of the Social Service Allowance Department in the Spandaryan Region in Yerevan. In 1999 he was appointed advisor to the head of the Real Estate Cadastre under the RA Government. From 1999-2003 he was active in the Rule of Law Party.

On May 25, 2003 he was elected to the NA from the proportional list of the Rule of Law Party and he is currently the chairman of the NA Standing Committee on Social, Health Care and Environmental Protection Affairs. He is a member of the Rule of Law Faction and its deputy head.

Mr. Mkheyan is married and has two children.