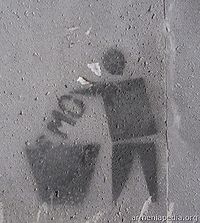 When Argam and Nelly walk along the street together, many passers-by turn around to check them out. The teenagers dressed in black and pink attract attention with their haircuts with a front fringe closing one of their eyes and eyes heavily painted in black

Argam and Nelly, both 18, are representatives of emo culture. (A popular youth movement mainly in the United States and Europe, with a wide internet community such as: http://emospace.ning.com/ )

Emos initially used to be fans of emo rock, and later emo culture was formed. The word ‘emo’ is derived from the English word ‘emotional.’ Emos are usually 12-18-year-olds; they wear either black or pink clothes, tight jeans, fingernails painted in black and listen to Emo music (Tokyo Hotel, AFI, Avril Lavine, etc.). (The first emo appeared in Yerevan in 2007.)

Argam Babayan, 18, is believed to be the only ‘Emo boy’ in Yerevan. Argam does not exclude that there might be other emo boys in the city, too, however, they are afraid to go out dressed like emo teenagers.

“I am not afraid, I dress like this all the time, and I do not want to change myself. However, when I walk in the street folks can insult me any time. They point at me, they say that I am a girl, or they ask whether I am a boy or if I am gay,” says Argam, who might be mistaken for a girl because he wears his hair long and also wears pink bracelets.

Emo teenagers say that there are about 20-25 emos in Yerevan, however only five of them are active in the theme. Argam says that it is because of the difficulty of being an emo in Armenia.

“The real emo must have a very expressive appearance and only a few would dare to dress emo style here,” says Argam. (Besides emos there are minority groups of goths, punks, Satanists and other youth movements in Yerevan)

Teenagers who consider themselves to be emo, are typically either sad or depressed, or they are extremely happy. Emos try to show the state of their mind to people around them by all means. Emo teenagers are never ashamed of their tears, and they can cry in front of many people. Depressed emos even try to hurt themselves, and cause psychological and physical pain to themselves. That’s why the suicide rate is higher amongst emo youngsters than ordinary youngsters. (No emo suicide has been reported in Armenia though).

Extremists even claim to believe that emo teenagers must commit suicide once they are 18 years old.

“Sometimes we are simply very, very sad, and then we may become unruly,” says Nelly Movsisyan, who is an emo since she turned 16, but whose family disapproves.

Once Argam, who has problems especially with his father, after quarrelling with him took too an overdose of aspirin and he slept, but in the morning he woke up quite healthy.

“I do not understand why my father does not accept me the way I am. I do not do anything wrong, I do not smoke, I do not drink alcohol, I do not take narcotics,” he wonders.

“Now he does not live with us, he lives with his second wife in Echmiadzin after my mother’s death. But when he comes to Yerevan, he always provokes quarrels with me. And then I want to leave home,” Argam says.

Now Agram lives with his two sisters. He works nightshift at a plastic bottle production shop at the Aparan waters plant. Argam says he got the job with great difficulty.

“I worked in a supermarket, and one day my boss came and told me to cut my hair the next day and only then come to work. And without saying anything I simply quit the job,” says Argam.

Nelly’s father is more tolerant. She says her father works in Russia and some of his friend’s kids are also emos.

The emos Argam and Nelly meet very often, they go for walks in downtown Yerevan, more often in the city’s area known as Cascade.

“When nobody understands you, you try to find someone who would entirely understand you. Now I am very happy that we have met,” says Argam.