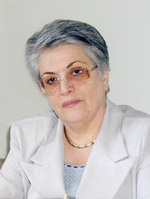 Emma Khoudabashyan was born on March 3, 1947 in the village of Tsovagyough in the Sevan region.

Ms. Khoudabashyan graduated from the Armavir State Pedagogical Institute in 1973, in the Russian Federation. She is a teacher and psychologist.

From 1973-1977 she worked as a metalworker and fitter in the Yerevan Electrical Equipment Plant.

From 1979-1994 she worked as a dispatcher and technician in the Yerevan Microelectronics Institute. She spent the next five years as Senior Methodologist of Sevan Tourism Association.

1999-2003 was her first term as a deputy of the NA (from the proportional list of the UnityAlliance) and she was on the NA Standing Committee on Social Affairs, Health Care and Environment. She was first a member of the Unity Faction and later the People's Voice Deputy Group.

On October 21, 2003 she was reelected to the NA from the proportional list of the Justice Alliance and she is currently on the NA Standing Committee on Foreign Relations. She is not a member of any of the NA faction or deputy group and she has no political party affiliation.

Ms. Khoudabashyan is married and has two children.