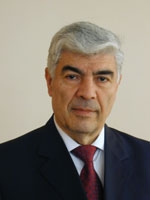 Edward Gabrielyan was born on August 16, 1941 in Yerevan.

He received his degree in civil engineering from the Yerevan Polytechnic Institute in 1968.

From 1959-1965 he worked as a skilled worker in the Fine Arts Production Complex under the Armenia Theatrical Company. From 1965-1967 he worked as its chief engineer, the next three years as acting director, then dirctor from 1974-1976. For the next twenty years he worked as a general director of the Industrial Complex Natural Precious Stones of Armenia. In 2000 he was appointed president of the board of direc­tors of the Yerevan Microbuses OUAZ OJSC and President of the Yerevan OUAZ CJSC.

On May 25, 2003 he was elected deputy to the NA from the proportional list of the Rule of Law Party and currently serves on the NA Standing Committee on State and Legal Affairs. He is a member of both the Rule of Law Faction and party.

Mr. Gabrielyan is married and has two children.