From armeniapedia.org
(Redirected from Condoleezza Rice)
Jump to: navigation, search 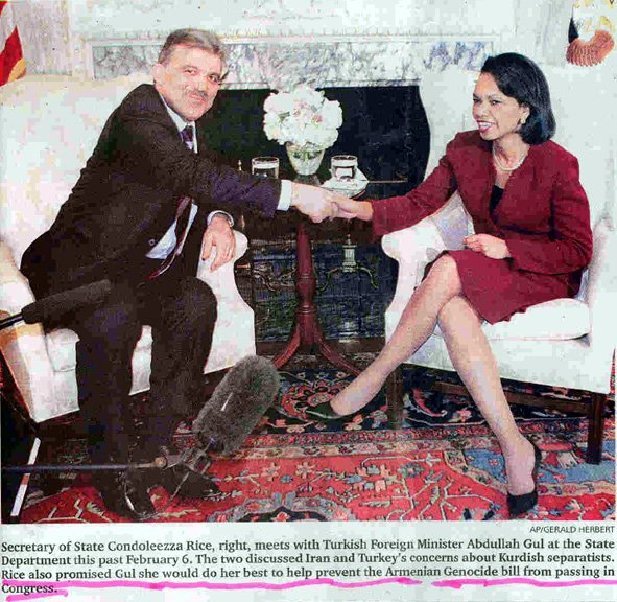 In the newly released No Higher Honor: A Memoir of My Years in Washington, former Secretary of State Condoleezza Rice brags about her efforts to kill the Armenian Genocide Resolution in Congress in 1991 and 2007, dismissing the genocide as “something that had happened almost a hundred years before” and about which “there are many historical interpretations.”

Rice reveals how in 1991, as the acting special assistant for European affairs for the Bush Administration, she was tasked with the responsibility “to mobilize an effort to defeat the [Armenian Genocide] resolution in the House of Representatives.”

“The Turks, who had been essential in the first Gulf War effort,” Rice remembers, “were outraged at the prospect of being branded for an event that had taken place almost a century before—under the Ottomans!”

“Back then I had succeeded in my assigned task,” Rice congratulates herself, noting that in the years that followed, presidents and secretaries of state continued “to fight off the dreaded Armenian genocide resolutions,” pushed forward, of course, by none other than “the powerful Armenian American lobby.”

Pulling a page from the Turkish state’s official narrative on 1915, Rice notes that the massacres of Armenians are better left to scholars. “Tragic” as these deaths were, “it was a matter for historians—not politicians—to decide how best to label what had occurred,” she observes.

Rice then proceeds to discuss her second encounter with the “dreaded” resolution in 2007, “in the midst of tension on the Turkish-Iraqi border and with Ankara’s forces on high alert.” Rice recounts how she begged House Speaker Nancy Pelosi to block the vote, and the latter said “there was little she could do.”

She continues: “Defense Secretary Bob Gates and I delivered a press statement outside the White House, reiterating our opposition and saying that our own commanders in Iraq had raised the prospect of losing critical bases in Turkey. Eight former secretaries of state signed a letter opposing congressional action on the issue.”

At this point, having already argued a few paragraphs before that 1915 was old and passé, Rice repeats herself: “All this occurred over a resolution condemning something that had happened almost a hundred years before.”

The former secretary of state then notes that the Bush Administration persuaded Ankara that everything possible was being done to prevent a vote. The administration eventually succeeds in its efforts.

“This was all the more galling,” she adds, “because the democratically elected Armenian government had little interest in the resolution. In fact, it was engaged in an effort to improve relations with Turkey, and it didn’t need it either.”