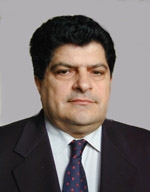 Mr. Apoyan received his degree in engineering technologies from the Yerevan Institute of Animal Husbandry and Treatment in 1975. He was awarded an Ananya Shiaraktsi medal in 2001.

From 1974-1975 he worked as an engineer-technologist in the Cheese Factory of the Toumanyan region. He served in the Soviet Army from 1975-1976. From 1977-1988 he worked as a senior engineer in the Armenian division of the Armenian Research Institute for Butter and Cheese processing, first as a skilled worker and later as a senior engineer and then head of production in Yerevan Dairy Factory. The next two years he worked as a head of its ice-cream department. from 1989-1995 he headed the Ashtarak Cheese Factory. From 1995-2002 he was the president of the board of directors and executive director of Ashtarak Kat CJSC. He was also the president of the board of directors of the Yerevan Dairy Factory CJSCs.

Mr. Apoyan is married and has two children.