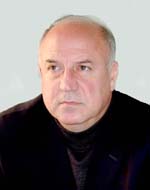 Artashes Geghamyan was born on December 2, 1949 in Yerevan.

Mr. Geghamyan graduated from the Yerevan Polytechnic Institute in 1971. From 1988 to 1990 he attended courses at the Academy of Social Sciences under the Central Committee of the USSR CP. He is an engineer-electro technician.

From 1974 to 1976 he was the First Secretary of the LCYU Committee of the Yerevan Polytechnic Institute. From 1976-1978 he headed the Students and Youth Sector of the LYCU Central Committee. From 1979-1986 he served first as an instruc­tor and later head of a subdivision, inspector, and first deputy of the head of division of the Central Committee of the Communist Party of Armenia Organizational Division and eventually was the Assistant of the CPA CC First Secretary. From 1987-1989 he worked as a first secretary of the Yerevan Mashtots District CPA Committee. From 1989-1990 he was the Chairman of the Executive Committee of Yerevan City Council. He spent the next four years as a member of the group of observers in the Andrnavtgazshin JSC, the Director of Prometheus Armenian Universal Exchange and the General Director of 21st Century Ltd.

Mr. Geghamyan was a candidate in the 2003 presidential election.

Mr. Geghamyan is married and has two children.