From armeniapedia.org
(Redirected from Arno Babajanyan)
Jump to: navigation, search

The 85th anniversary of Arno Babajanian, a distinquished composer of the 20th century, the USSR People's Artist, the State Awards laureate of Armenia was on January 22.

Arno Babajanian was born in Yerevan. Babajanian's childhood friend composer Alexander Haroutiunian mentions that starting with the age 5-6 Babajanian attempted to play the old piano of the kindergarten, and one may say that he already made the first steps in music. A.Babajanian used to tell about his and world-famous composer Aram Khachatrian's meeting: "When I was a kindergarten child, a man once visited us and asked to sing to get to know who of us had music ear. I was singing and kicking the floor at the same time. Listening to me, that man said that I must be engaged in music. In future I learnt that the man was Aram Khachatrian."

"Babajanian is one of those individuals who are called to represent a whole nation, its fate and the spirit of lifetime. The artist becomes such one not only owing to the talent given his from above but by his motives of a patriot, by sense of responsibilities having towards the people," composer Ghazaros Sarian wrote.

USSR People's Artist Khoren Abrahamian used to repeat that "Arno was the most talented artist of the Armenian reality of the second half of the 20th century as the God gifted him greatest genius."

Events dedicated to the composers' 85th anniversary will be organized during the year in Armenia, Russia, France and U.S.

Yerevan's monument to the well-known Armenian composer Arno Babajanyan was originally placed at it's location on the corner of Tumanian and Terian Streets in September, 2002. Before it could be unveiled, a controversy erupted over it's appearance and things were postponed while it was modified. It was then officially unveiled July 4, 2003 by Yerevan mayor Yervand Zakharyan with the musician's famous "Nocturne" playing as background music.

The author is sculptor David Bejanyan. Babajanyan is pictured playing the piano.

The statue first appeared in Opera Square last September and before it could be officially presented it had created so much uproar that even President Robert Kocharian weighed in on the debate. (Kocharyan questioned whether the statue was appropriate. Then-mayor Robert Nazaryan, who commissioned the piece, staunchly defended it.)

Public outcry was so great that the statue was dismantled and its creator, sculptor David Bejanyan was asked to make modifications.

Other artists defended Bejanyan's work, while intelligentsia, fans of the popular musician and traditionalists called it a disgrace.

At the heart of the dispute was the manner in which Bejanyan chose to portray Babajanyan, giving the musician a rather whimsical and exaggerated expression, and exceptionally long fingers that critics said made him look like a bird.

Bejanyan reluctantly agreed to alter the statue, saying that he would not compromise the general mood of the piece, but would tone down its caricature appearance.

After seven months the statue returned to its pedestal, where Babajanyan is represented, seated at a grand piano (made of Ukranian basalt). The bronze sculpture cost about $50,000, given by benefactor Ruben Hayrapetyan who said Bejanyan and an architect donated their work.

The artist made subtle changes, but not obvious enough to satisfy critics.

The revised Babajanyan has shorter fingers and his face is more realistic. But in a city filled with serious-faced, static statues of heroes, this one will no doubt continue to divide opinions of onlookers. 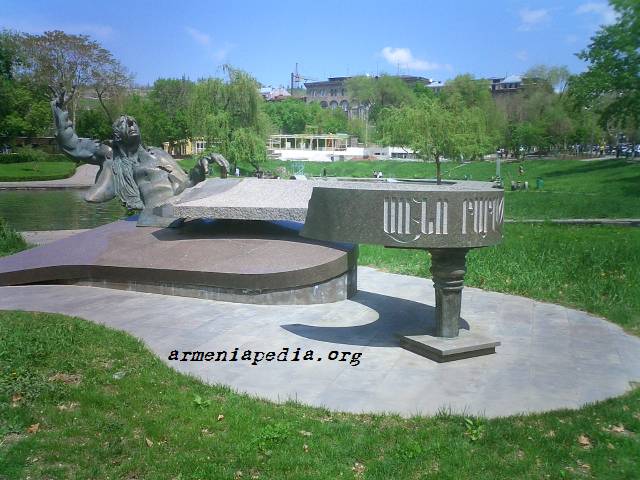