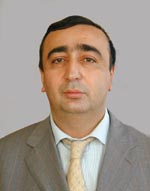 Armen Mkhitaryan was born on April 8, 1961 in Yerevan.

Mr. Mkhitaryan graduated with a degree in economics from the Yerevan Institute of National Economy in 1990 and with a law degree from Yerevan Vardanants University in 1997.

From 1979-1981 he served in the Soviet Army. From 1982-1983 he worked as a metalworker in the Yerevan Souvenirs Factory. He spent the next eight years as a stage director in the State Television and Radio Committee. From 1991-1994 he was the pres­ident of Arabkir-Khnous Ltd. From 1989-1993 he took part in the Artsakh war of lib­eration. From 1994-1999 he was the deputy head of the Yerevan Department of the Ministry of the Interior, head of the Shengavit Department, head of the MI Intelligence Department and head of the Arabkir Department. In 1996 he became the president of the Afghanistan War Veterans' Union.

1999-2003 was his first term as a deputy of the NA (electoral district # 6) and he sat on the NA Standing Committee on Defense, National Security and Internal Affairs. He was a member of the Unity Faction.

On May 25, 2003 he was reelected to the NA from electoral district # 7 and he is currently on the NA Standing Committee on Foreign Relations. He is a member of the Republican Party of Armenia Faction. He has no political party affiliation.

Mr. Mkhitaryan is married and has one child.