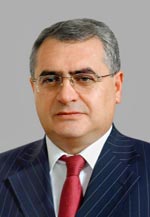 Mr. Mkrtchyan graduated with a degree in medicine from the Yerevan State Medical Institute in 1978. He is a Doctor of Medical Sciences.

On May 25, 2003 he was elected to the NA from the proportional list of the Republican Party of Armenia. From June 2003 to October 2004 he was serving on the NA Standing Committee on Science, Education, Culture and Youth Affairs. Currently he sits on the NA Standing Committee on Social, Health Care and Environmental Protection Affairs. He is a member of both the Republican Party of Armenia Faction and party.

Mr. Mkrtchyan is married and has one child.