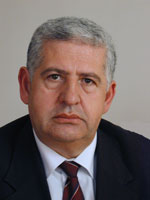 Mr. Malkhasyan graduated from Yerevan State University in 1970 and did his postgraduate studies in Moscow State University. He is a chemist, professor and Doctor of Chemical Sciences.

In 1974 he started as a junior scientific associate at the Institute of Chemistry under the Armenia SSR Academy of Sciences. For the next twenty years he worked first as a senior scientific associate, later laboratory head and in the end head of division in Nairi Scientific and Industrial Complex, All-Union Institute of Polymers. From 1993-2000 he was the Director of Paren CJSC under the RA Ministry of Agriculture. From 2000-2002 he was the head of standardization, Metrology and Certification Department under the RA Government. From 2002-2003 he was the deputy of the RA Minister of Trade and Economic Development.

Mr. Malkhasyan is married and has three children.