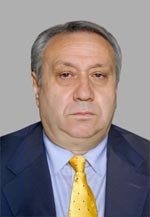 Mr. Karapetyan graduated with a degree in engineering and economics from the Yerevan Polytechnic Institute in 1974 and from Baku Highest Party School under the Central Committee of the Soviet Union Communist Party in 1989.

From 1974-1976 he was a senior laboratory assistant in the Engineering Hydrology Chair of Yerevan Polytechnic Institute and at the same time was the secretary of the LCYU Committee of the Civil Engineering Department. From 1976-1980 he was the second secretary and later first secretary of the LCYU Committee of Yerevan Polytechnic Institute. From 1980-1985 he worked first as a second secretary in the Party Committee of Yerevanshin Industrial and Construction Complex. The next five years he was an instructor first in the Construction and Urban Economic, and later Social and Economic, Departments of the ACP Central Committee. From 1991-1992 he was the head of department in Prometheus-Andrnavtgasshin JSC. From 1992-1995 he was the deputy head in Kaghshin Construction Complex and also the head of the commercial center of that complex. From 1996-1999 he was the General Director of Armbolinvest"Armenia-Bulgarian JV.

Mr. Karapetyan is married and has two children.