From armeniapedia.org
(Redirected from Abe Foxman)
Jump to: navigation, search 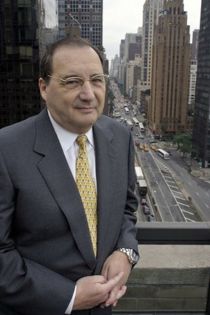 On August 22, 2007, the Anti-Defamation League issued a legalistically dishonest statement that purported to be an acknowledgment of the Armenian Genocide, but was not. The ADL’s full statement implied that the Armenian Genocide was simply a “consequence” of wartime conditions. But the 1948 United Nations Genocide Convention, the grandfather of all international law on genocide, specifically requires intent by the perpetrator to legally qualify as a “genocide”.

Foxman and the ADL continue to state that they still do not support the Genocide Congressional resolution calling it "a counterproductive diversion and will not foster reconciliation between Turks and Armenians."

Later, in 2009 after the Davos incident between Erdogan and Peres, a NYT article said:

No Place for the Anti-Defamation League, an article by David Boyajian published in Armenian, Assyrian, Hellenic Genocide News and elsewhere, 2007

Did Abraham Foxman Acknowledge the Armenian Genocide?, an article by Joey Kurtzman published in Jewcy, 2007

Foxman Remark at Suffolk No Substitute for Formal Statement, an article by Katie Van Adzin in the Armenian Weekly, 2014