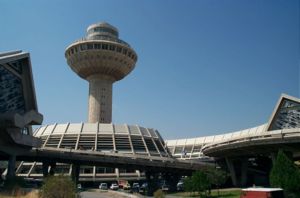 Zvartnots International Airport is located near Zvartnots, about 10 km west of Yerevan, the capital city of Armenia. The airport was inaugurated in 1961 and renewed in the 1980's with the development of a new terminal area. In 1998 a new air cargo terminal was opened.

Yertughayin Taxi #201 connects the airport with the crossroads of Sayat Nova and Mashtots streets in Yerevan.

In 2004 the construction of a new international terminal began. The new passenger terminal will cost $50 million and will be carried out in three stages within three to four years. It began 90 days after the Government ratified the project. The building of this terminal is part of an agreement signed by the Armenian Government in December 2001 leasing the Yerevan Zvartnots airport for 30 years to the Argentine-American company "Corporation America", owned by Argentine-Armenian businessman Eduardo Eurnekian. The blue print for the re-design of the entire airport envisages investments of $59 million and a timeline of about eight years. The total value of investments into Zvartnots is estimated to be $80-100 million.

On September 14, 2006 the newly built arrivals hall was opened for service. The new international terminal with its departures section opened in the spring of 2007, though check in is still at the old terminal.

07.11.2011 Elina Chilingarian A new departures sections of Armenia’s main international airport received the first passengers on Monday, marking the virtual completion of its multimillion-dollar reconstruction by an Argentine company.

The Corporacion America group of Eduardo Eurnekian, an Argentine billionaire of Armenian descent, took over the Zvartnots airport near Yerevan in 2002 after signing a 30-year management contract with the Armenian government.

The agreement committed it to building a new airport terminal and modernizing other airport facilities left over from the Soviet era. The terminal’s arrivals section went into service in 2006.

The larger departures area was inaugurated by Eurnekian and President Serzh Sarkisian in late September. But it began functioning only on Thursday morning as passengers checked in for a regular flight to Saint Petersburg, Russia at the new glassy building.

Eurnekian’s group, which operates over 30 airports across South America, claims to have invested $160 million in Zvartnots’s reconstruction.

The airport’s newly built terminal will employ 1,500 people and have the capacity to process up to 3.5 million passengers a year, up from 1.1 million who used it last year.

The Zvartnots operator hopes to attract more transit flights from Europe, the Middle East and Asia. Eurnekian said the upgraded airport will also facilitate a greater influx of tourists into Armenia

“Armenia needs the best, should have the best and we are trying to give it the best,” the 79-year-old tycoon told journalists at Zvartnots.

The Zvartnots complex is also expected to become soon home to Armenia’s first-ever tax-free zone that will mainly cater for domestically grown agricultural produce to be exported abroad. It will have warehouses equipped with refrigerators, packaging facilities and a food safety laboratory.

The creation of the tax haven is envisaged by Eurnekian’s 2001 agreement with the Armenian government. The Argentine tycoon, who has a warm rapport with Armenia’s current and former presidents, owns hundreds of hectares of vineyards and orchards in the Ararat Valley adjacent to the airport.

Out of date - do not rely on this list.

The business plan includes a paragraph on demolition of the airport's old terminal. According to Azizyan, with the unsatisfactory state the building is in, its fortification will require a minimum of AMD 10-12 million. Also, the old terminal renders the concessioner's plan to expand the airport area impossible.

Architects present at the discussed spoke against the old terminal's demolition, noting that the latter doesn't necessarily hinder the expansion plan.

A representative of the air transport policy subcommittee Isabella Muradyan, in turn, noted that the old terminal allows landing of major airliners, servicing of several planes, with the new building having no such capacity. "The old terminal can also allocate a transit zone," she said, objecting to the demolition of the terminal.

As Azizyan noted upon completion of discussions, GDCA will support any decision taken by the Public Council.

As the Public Council spokesperson Ani Gasparyan told PanARMENIAN.Net a month ago, the head of the General Department of Civil Aviation Artem Movsisyan requested the Council to organize public hearings on the Zvartnots old terminal demolition.

"As he noted, with the airport development program discussed by the government and Armenia International Airports CJSC, the possibility of the terminal's demolition is not ruled out," Ms Gasparyan said.

At the same time, as Zvartnots press service told PanARMENIAN.Net no application for demolition of the old terminal was submitted to the Municipality.

Earlier, the Municipality's Architectural Council gave a negative assurance over the request of Armenia International Airports CJSC, owned by Argentinean-Armenian businessman Eduardo Eurnekian, on demolition of the old terminal.