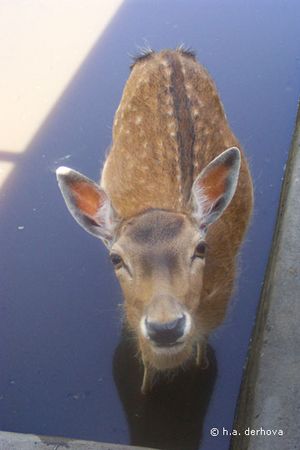 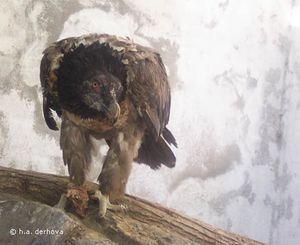 The Yerevan Zoo, though underfunded, has come through a very rough period it experienced in the early 1990s during blockade and energy crisis. A visit now will take you through a tour of many animals both native to Armenia and from abroad. From native bears to camels and tigers. The entry fee is minimal and feeding of some animals is permitted (if not encouraged).

The zoological garden of Yerevan was established in 1940 in compliance with a decision of the Presidium of the Supreme Soviet of the Armenian SSR. The garden nestles in a picturesque gorge and takes up an area of about thirty-five hectares.

At present the garden counts about 1500 different animals and 260 species.

The breeding of aquarium fish was started in 1971 and currently the aquariums contain 800 fish of 40 different species.

The reptiles of the zoological garden of Yerevan comprise the tortoise, the crocodile, the lizard and the snake. The feathered world is quite rich in the garden: African ostriches, cassowaries, emus, nandus, loons, pink pelicans, white storks, flamingoes, swans, owls, birds of prey, parrots and many more.

The mammals in the zoo are of a wide variety: lions, tigers, and white, brown and Himalayan bears, jaguars, leopards, black panthers, pumas, cheetahs, hyenas, trots.

The visitors evince keen interest in such animals as the tapir, the kangaroo, the zebra, the pony, the hippopotamus, the elephant, the llama, the reindeer, the zebu, the bison and the yak.

The little visitors enjoy the monkeys for hours.

The zoo garden also displays the specimens of the Armenian flora: the Transcaticasian wolves, the fox, the bear, the wild boar, the hyena, the marten, the poisonous snakes, and the birds of prey.

The zoological garden of Yerevan is, in addition, an educational-research centre. Fervent activities are developed here aimed at popularizing biological data and at raising and preserving rare species of animals; again, thematic exhibitions are set out and excursions are arranged.

The zoo is a favorite haunt of the inhabitants of the capital. In addition to the official state-run museums there is a large number of departmental museums and shows, such as the zoological museum of the Armenian academy of sciences, the museum of minerals of the geological board under the Council of Ministers of the republic, the exhibition of achievements in the national economy of Armenia, the exposition of the artists' house, to mention but a few.

The following archaeological hoards figure now as peculiar museums: Karmir Blour (Teyshebaini), Arin-berd (Erebouny). The guests of the capital also visit the house where Stepan Shahumian was born in 1906, the Statue of Victory, the obelisk in token of the semi-centennial of Sovet Armenia, the Tomb of the Unknown Soldier, etc.

To crown it all, there are large numbers of interesting ar-chaeologioal and architectural monuments within the city limits.