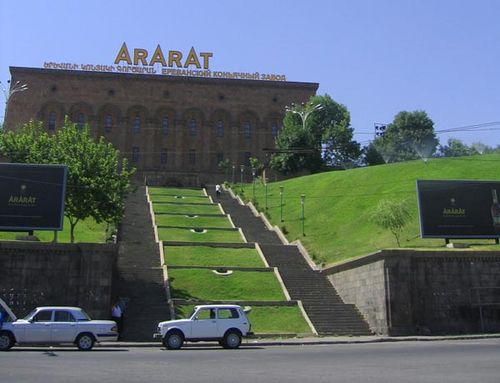 Yerevan Brandy Company (YBC) (Armenian: Երևանի Կոնյակի Գործարան) is the leading enterprise of Armenia for the production of alcoholic beverages. Its main brand name is ARARAT. Currently the company boasts a large following, particularly in Russia, as well as in Ukraine and Belarus. The Russian market accounts for about 85% of exports.[1] YBC is owned and operated by the French giant Pernod Ricard.

Established in 1887. Now owned by the French giant Pernod Ricard, it is often referred to as the Ararat Brandy Factory and continues to produce brandy which has a worldwide following.

The brandy distillery stands on a high plateau at the other end of Haghtanak Bridge (Victory Bridge), as if competing, in architectural design and the quality of its produce, with the Ararat Wine Factory. Architect Ovanes Markaryan used all the geographical features to advantage, and the building, with its nine austere arches, and long flight of steps leading to it, puts a striking finish to the view of the bridge.

The Brandy Factory offers tours, with a full visit to its production facilities, and tasting of their various brandies. Call for more information (+374-10) 54-00-00.