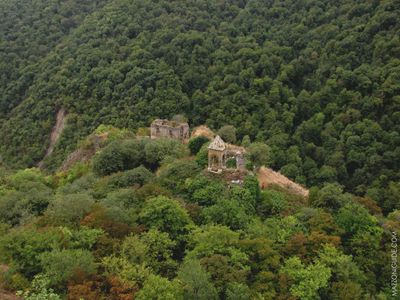 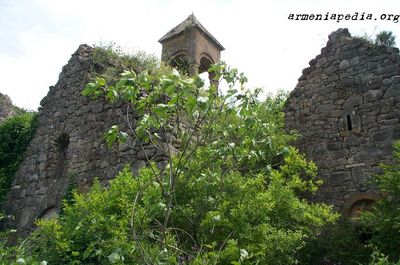 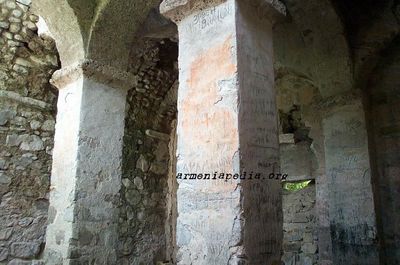 Interior of a church

Mrovasar Mountain took under its shadow Yeghishe Arakyal or Jrvshtik Vank. Great difficulties must be conquered to visit it. The path goes through forests, over the sharp rock edges of deep ravines. The southern side of the convent is stony; the other three have fortification walls.

In the book "History of Aghvan world" this place is recalled as "Nersmihiri saint friary, which is now called Jrvshtik".

The temple was called Jrvshtik probably because of the waterfall in the southern deep ravine. When Yeghishe Arakyal's (one of the Christian preachers) relics from Horaka convent were transferred here, the convent then was renamed after him.

The complex consists of a church, a vestibule, seven chapels, a graveyard and other ruined buildings.

The church built with vaulted halls has a very old foundation, it is very old, the architecture is simple and tall lacking decoration.

Still the temple with its antiquity and artistic work is really noteworthy. Throughout ages the church has been reconstructed. And even now it is not difficult to see that among the unprocessed stone walls some trimmed old stones were also used, and they have some architectural details on them. The church (10x5,8 m) has two doors from south and west. The vestibule is built according to the architecture of the church. Almost square halls with two pillars carrying the vaulted roof. The inscription on the lintel of the door tells us that the church was built in 1284. There are many tombstones inside the church as well as outside of it.

The lithographic inscriptions on the walls belong to XII-XIII cc.

Due to the position of the front lines, regulations and road conditions, the following trip is not recommended for anyone but is probably possible. Heading straight N from Mardakert, you reach the village of Mataghis, which straddles the Tartar River. From Madaghis you can hike (yes, on foot) up your right bank of the Tartar River, then head NW at the first tributary, the Yeghsharakel River until you reach on your right hand bank, Yeghish Arakyal* Monastery. Built up during the 5th-13th centuries, this monastery resembles a small-scale Dadivank. Paragraph Source: Rediscovering Armenia Guidebook