Difference between revisions of "Vincent Lima" 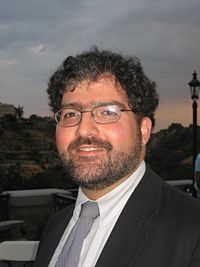 Vincent Lima is the editor of the Armenian Reporter[1], an independent newsweekly published by CS Media Enterprises LLC. He joined the senior management of CS Media in March 2006 and took over as editor of the Reporter in October 2006.

Since the early 1990s, Lima has had a high profile in the Armenian-American community as an editor and public intellectual. He edited the scholarly journal Armenian Review from 1989 to 1996. He started Armenian Forum: A Journal of Contemporary Affairs, which he coedited with Ara Sarafian from 1998 on. He has served as director of the Gomidas Institute.

Before joining CS Media, Lima worked in the testing industry, developing content for high-stakes tests. For the American Institute of Certified Public Accountants, he worked on innovative products (such as auditing simulations) for the Uniform CPA Examination; prior to that he wrote and reviewed questions for the Analytical sections of the GRE® and the Critical Reasoning sections of the GMAT®.

Vincent Lima lives in Yerevan with his partner Martha Boudakian and their two daughters.