Difference between revisions of "Viktor Hambartsumian" 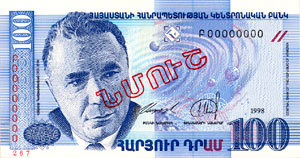 He was born in Tbilisi, Georgia. After graduation in Leningrad he studied with Aristarkh Belopolsky in Pulkovo Observatory from 1928 to 1931.

Longtime president of the Armenian Academy of Sciences, founder and director of the Byurakan Astrophysical Observatory (BAO) in 1946. He was one of the pioneer of theoretical astrophysics. He worked on the cosmogony of stars and galaxies, stellar dynamics, and gaseous nebulas. In 1947 he discovered stellar associations.

Byurakan Observatory is located on the southern slopes of Mt. Aragats. World renown by astronomers, it was headed by Viktor Hambartsumian who was also the President of the International Astronomical Union (IAU). During his time at the observatory, Viktor developed theories of young star clusters, and computing the mass ejected from nova stars.

The asteroid 1905 Ambartsumian is named after him.