Difference between revisions of "Vernissage" 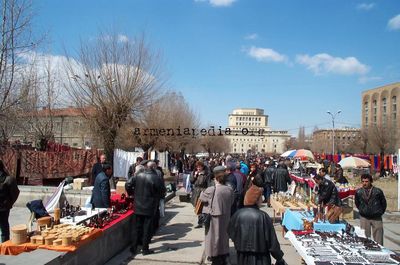 Vernissage Market - one of many aisles. 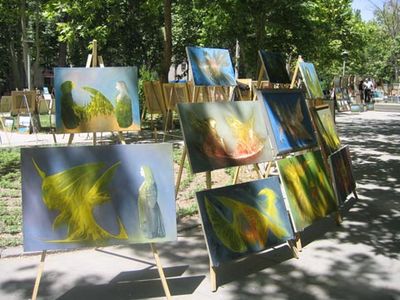 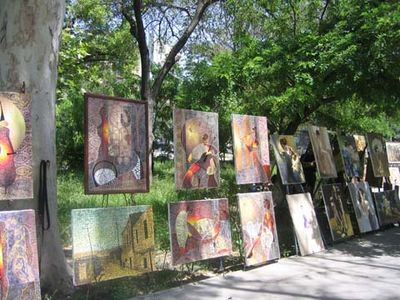 The French word "Vernissage" (a private showing held before the opening of an art exhibition) has been rooted in the vocabulary of Yerevanians since the late 1970s.

Nowadays, you can find almost anything in this weekend open market. In just a few blocks, you will see, besides art, carpets, old collections of coins and medallions, jewelry, music, books, carved wood, lace, embroidery, ceramics, posters, food, tools, parts for electronics and even pets. It is open year round, though only on the weekends, except for a rump vernissage held daily at the end of the usual Vernissage venue where it meets Khanjian Street.

The Vernissage is the perfect place to get a little taste of Armenia and a unique scenario to witness the fusion between national traditions with contemporary taste.

Originally this word represented the inauguration of a temporary exhibition. However, the Vernissage has been proven to be one of the most important and constant elements of Yerevan’s cultural life.

It was established in the mid-1980s by Armenian artists who displayed their art in the square in front of the Union of Armenian Artists. Initially, mainly art students displayed their work in a small park by the Komitas Monument, right in front of Yerevan's Conservatory. After some time, the Vernissage gradually moved to the Saryan Monument, located in the middle of another small park facing the Main Hall of the Armenian Philarmonic. There, it became the most important center of art exhibition in the city. It’s popularity during the 90s not only attracted more artists, but also many other merchants with a variety of items for sale. Consequently, the market expanded, including the area between Nalbandian and Khandjian streets.

The Paintings Vernissage is located by the Saryan statue at French Square, and the main market starts by the Republic Square metro station and runs all the way to Khanjian Street.