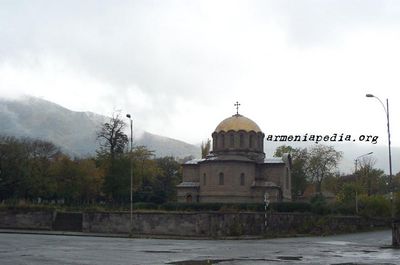 Vanadzor (93823 p, till 1935 Gharakilisa or "Black Church," till 1992 Kirovakan after Bolshevik Caucasus specialist Sergei M. Kirov/Kostrikov, murdered in 1934 and buried in the Kremlin Wall) is the capital of Lori Marz, Armenia's third largest city, laid out ambitiously in a once-lovely valley now hideously blighted by a huge chemical plant. The plant, privatized in 1999, produced a wide range of chemicals, and also specialized in growing industrial crystals. In 1998, the remaining workers of the plant were using the gas-fired crystal growing boxes to bake potatoes. Vanadzor lost 564 residents in the 1988 earthquake, but preserved most of its grand main street. There is a high-rise hotel with intermittent running water and other amenities in the main square, as well as a number of brand new hotels providing very comfortable and clean accomodations.