Difference between revisions of "Vahakn Dadrian" 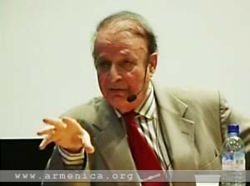 Vahakn Dadrian is an historian, specializing in the Armenian Genocide. Dadrian, a former professor at SUNY, Geneseo, currently directs a genocide study project supported by the Guggenheim Foundation.

In the last twenty years he has lectured extensively in French, English and German in such European institutions as the Free University of Berlin and the Universities of Munich, Parma, Torino, Zürich, Uppsala, Frankfurt am Main, Cologne, Bochum, Münster, Amsterdam, Utrecht, Geneva, Brussels and UNESCO’s Paris center. Professor Dadrian was the first Armenian scholar invited in 1995 to the British Parliament, House of Commons, to deliver a lecture commemorating the 80th anniversary of the Armenian genocide. In 1998, in a special ceremony, he was inducted into the ranks of the Academy of Sciences of the Republic of Armenia. At the same time, he was decorated by that republic’s president with the Khorenatzi Medal, Armenia’s highest cultural award.

His groundbreaking research has been supported by two large grants from the National Science Foundation, resulting in the publication of two separate monographs by the Yale Journal of International Law.

Following a series of specifically arranged lectures in Armenia in April 2005 commemorating the 90th anniversary of the Armenian genocide, Prof. Dadrian was declared Honorary Professor by four universities in Armenia. Additionally, he received three gold medals, one of which was presented by the Rector of Yerevan State University, and the other by the President of Yerevan’s Law School—both of them being the highest awards of these institutions.