From armeniapedia.org
Revision as of 08:27, 4 May 2013 by AngelaIBlackmerian (talk | contribs) (removed something I didn't mean to leave in)
(diff) ← Older revision | Latest revision (diff) | Newer revision → (diff)
Jump to: navigation, search

For nationalistic and other politically-motivated reasons, the Republic of Turkey officially rejects the notion that a genocide of Armenians in the Ottoman empire ever took place. The Turkish government claims that the deaths were the results of fighting in World War I rather than a deliberate, systematic elimination of Armenians. This denial continues despite an overwhelming body of evidence to the contrary, as well as a growing movement of Turkish intellectuals and activists calling for official recognition.

This page will document the history of Turkey's massive campaign to coverup and deny the Armenian Genocide, even extending to accusing Armenians themselves of Genocide. 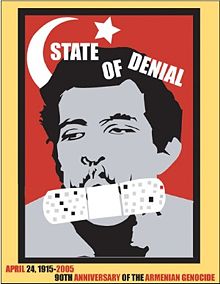 Excerpts from: Turks Cause Worldwide Outcry
By Canceling Genocide Conference

Three of Turkey's most prestigious universities had organized a conference that was to take place in Istanbul, May 25-27, 2005 on "Ottoman Armenians During the Decline of the Empire: Issues of Scientific Responsibility and Democracy." Invited to this conference from around the world were only those Turkish scholars who did not accept the Turkish government's denial of the Armenian Genocide.

Minister Cicek, speaking on the floor of the Turkish Parliament, called these Turkish scholars "traitors" and accused them of "stabbing the Turkish nation in the back." He made this statement after several so-called historians, who are hired by the government to deny the Armenian Genocide, complained that they were not invited to this conference. A few members of the parliament also attacked the organizers of the conference for betraying Turkey's interests.

Fearing that these scholars were about to disclose a version of history which was not in line with that approved by the Turkish government, the Governor of Istanbul called Ayse Soysal, the rector of Bogazici University, the day before the conference, and ordered her to cancel the meeting. She declined. She also refused requests later that day from the Chief Public Prosecutor to hand over the texts of the papers to be delivered at the conference. In such an atmosphere of insults, slander, intimidation and threats, the organizers were left with no choice but to cancel the conference.

Here are some of the reactions to the cancellation of the conference:

Despite this worldwide outcry, Cicek insists that he stands behind his words and does not regret calling the scholars traitors.

Caroff said that Turkish officials explained their denial by the fact that Ararat is in Turkish territory of Turkey and does not belong to Armenia, hereby the Ararat trademark of YBC cannot be registered in Turkey.

YBC has appealed the refusal, but its claim has not been satisfied, Herve Caroff says. He says YBC policy is to register its trademarks in the markets it intends to enter.

YBC trademarks are registered in 48 countries, and its production is sold in 25 countries.

I used to live in Istanbul on the Street of Cauldron Makers, a steep, old street once populated by ethnic minorities in the 1940s; but then they were gone, ousted by sexual minorities in the late 1970s. A street that reflected so much of Istanbul's cosmopolitan essence and multilayered history essentially disappeared. Today, only a few traces are left from each group of the street's former residents: Traces that only those who are already familiar with its history can truly appreciate. There are no written remnants, nor are there written documents. If there could be a plaque on that snaky street in Istanbul saying, "On Sept. 6 and 7, 1955, a bunch of Turkish nationalists gathered here and shattered the windows of stores of non-Muslim minorities and looted the merchandise of Jewish, Armenian and Greek merchants and rolled it all along this steep street."

The debate about what happened to 1.5 million Christian Armenians between 1915 and 1923 continues, this time in U.S. District Court in Boston.

The issue is now at the center of a lawsuit over how students in Massachusetts should be taught in public schools.

"When I heard about this lawsuit, I turned a little scarlet," said Mary Foley, of Peabody.

Foley, the sister of the late mayor Peter Torigian and the daughter of two survivors of the Armenian Genocide, grew up hearing about the aggression toward the Armenians by the Turks.

"I don't know who these people are who filed the lawsuit, but they didn't have any relatives go through what my parents did."

Foley's mother had lost both parents and lived in orphanages throughout the Mediterranean with her sisters; Foley's father had lost his first wife, his young son, and his brother during that time.

"I grew up hearing about it and seeing the pain and anguish that my parents suffered," she said.

But the people who filed the lawsuit argue that whether the Armenian killings constitute genocide has not been firmly settled by history.

Students, they say, should also be exposed to a "contra-genocide" version of events espoused by Turkish groups who claim the Armenian deaths were one of the tragic offshoots of the war.

The lawsuit about how to present in the classroom what had happened during that eight-year period was filed last Wednesday by two high school teachers and a student and the Assembly of Turkish American Associations.

They are suing state education officials in federal court, challenging a law that set guidelines for teaching students about human rights violations.

The law, which went into effect in 1999, specifically lists the Holocaust, the Mussolini fascist regime, the trans-Atlantic slave trade, and the Armenian Genocide.

"We are not taking sides on the ultimate issue of whether there was an Armenian Genocide. We are simply insisting that both sides be allowed to have a place at the table," said Harvey Silverglate, a Boston civil rights lawyer who represents the plaintiffs.

"That is so students can look at historical resources and make their own decisions. That's what we call education," he said.

"I don't see any lawsuits being filed about any other genocides," said Richard Yagjian of Peabody. Yagjian is the son of two survivors of the Armenian Genocide. "I think it's an effort to try to eradicate the historical references to it."

In 1915, Turkish Ottoman authorities began arresting and deporting Armenian leaders. Armenians say that over the next eight years, up to 1.5 million Armenians were killed as part of an ethnic cleansing campaign by the Turks.

At that time, U.S. Ambassador to Turkey Henry Morganthau reported back to Washington, D.C. stories that parallel much of what Armenians who had escaped were telling.

Turkey acknowledges that large numbers of Armenians died, but says the 1.5 million figure is inflated and that the deaths occurred in civil unrest during the collapse of the Ottoman Empire, when Armenians sided with invading Russian forces during the war.

The lawsuit, filed last Wednesday, alleges that the state is violating the free-speech rights of the plaintiffs by excluding the Turkish point of view.

The lawsuit claims that education officials bowed to political pressure from Armenian groups who called the Turkish resources "racist," including one organization they said had engaged in a "disgraceful denial of mass murder and genocide."

But James Peyser, chairman of the state Board of Education, who is named as a defendant in the lawsuit, said that the resources and Web sites suggested by the Turkish groups "are not academic sites."

"If there were intelligent, credible works of history that provide independent and academically sound treatment of these events that did not necessarily characterize them as genocide, I would certainly be willing to include them in the guidelines, but I haven't received any such material at this point, and the Web sites don't qualify," Peyser said.

Bill Schechter, a history teacher at Lincoln-Sudbury High School, said he does not know enough to know which side is correct in the genocide debate. He said he became a plaintiff in the lawsuit because he believes students should have access to all points of view.

Narguiz Abbaszade, executive director of the Assembly of Turkish American Associations, said the lawsuit is not meant to decide the genocide question.

"The courts in Massachusetts do not have the jurisdiction or the expertise to settle it," she said. "This is us saying the students in school should have access to both sides of the story, to have access to the full picture."

U.S. Rep. John Tierney says there is no question that the Armenian Genocide occurred.

"The human rights violations resulting in the mass killings of Armenians on and after 1915 in Turkey are well documented and that is presumably why the Massachusetts law lists the Armenian genocide alongside other examples of man's inhumanity to man," he said.

However, the U.S. government, which considers Turkey an important ally and military partner, does not use the term "genocide" to describe the Armenian deaths. Last month, the Bush administration disavowed two resolutions passed by a Congressional committee to classify the 1915-1923 killings as genocide.