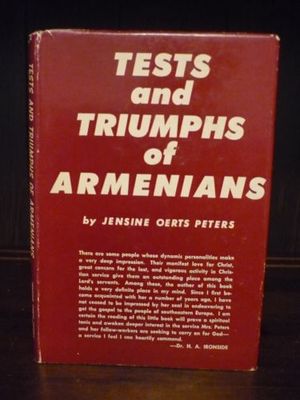 TESTS AND TRIUMPHS OF ARMENIANS IN TURKEY AND MACEDONIA by Jensine Oerts Peters. Published by Zondervan Publishing House, Grand Rapids, Michigan, 1940. Original paper wraps soiled, corners and spine worn, else binding and text are tight and in good condition. " Written by a Danish woman missionary who spent "forty-seven years of service to the Armenian people" starting in 1904, this is a recollection of some of her experiences and memories of her years there. Included is an account of working with the widows of the 1896 massacre of Malatia; although she had to return to Denmark in 1914 for health reasons, she went back to the area in 1922, first to Rodosto (Tikirdag) in Thrace where thousands of Armenian refugees were living, survivors of the deportations and "the death march" of 1915-1918. She describes the "catastrophe at Smyrna" and her flight with thousands of refugees to Thessalonika after the Mundania agreement which gave Thrace to Turkey had been signed."