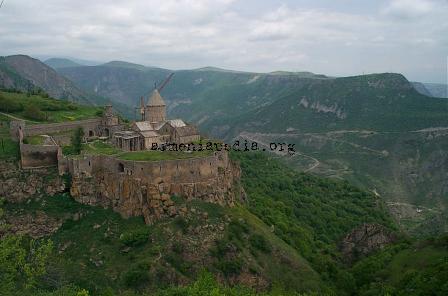 Tatev (Տաթեվ) monastery is situated near the village of the same name in part of Zangezur - ancient Syunik. The monastery was founded in the ninth century in place of a tabernacle well-known in ancient times. The strategically advantageous location on a cape formed by a deep river gorge with precipitous rocky slopes favored the construction of a mighty defense complex there. Tatev monuments stand out for high quality of building work. At one time Tatev was the political center of Syunik principality. In the 10th century it had a population of 1,000 and controlled numerous villages. In the 13th century it owned 680 villages, though some of the hippie villages fought hard to stay out of Tatev's hold. The earthquake of 1931 caused considerable destruction, but the parts that survived enable us to judge about the artistic merits of the complex. The main monument is the Church of Pogos and Petros (Peter and Paul) built in 895-906. It reproduces the type of domed basilicas of the 7th century, but has new features. In the stretched out interior, the middle nave, crowned with a tremendous in the middle of the plan's cross, predominates. As distinct from the domed basilica, the church had in its western part several annexes the corners of which served as the abutments of the dome. Its eastern abutments did not yet merge with the walls of the altar apse; consequently, the cross-winged shape of its interior is not too well pronounced. These features give us grounds to regard the church as an intermediate link in the development of the cupola hall into a cross-winged, dome type of building which became widely spread in Armenia later.

The outward appearance of the temple is severe and laconic. Its harmonious proportions add to the impression of its considerable height. The large dome, the low and closely-spaced arrangement of narrow windows and a high and round drum crowned with a pointed 32-fold roof immediately catch the eye.

The facades of the church, just as those of the 17th-century monuments, are smooth and free of superfluous detailing. On the eastern facade there are two deep triangular niches crowned, just like the windows, with thin ornamented edges. Four of them are decorated with representations of human faces, to which snake heads with stings sticking out are turned. Armenians believed snakes to be the protectors of their homes. The oval-shaped faces, with long locks of hair framing them and with eye sockets merely hinted at, are rather schematic. The only exception is the relief of the northern facade in which the carver tried to portray someone. According to Stepanos Orbelyan, an Armenian historian, these are the portraits of the founders of the church - Prince Ashot, his wife Shushan, Grigor Supan, the ruler of Gekharkunik, and Prince Dzagik. 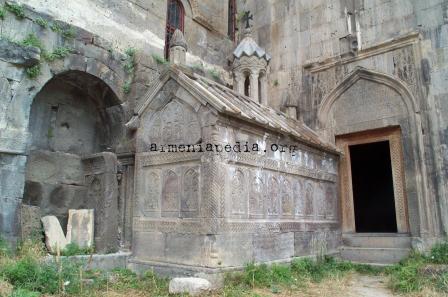 Special attention was paid to the interior decoration of the church which was the main cathedral of Syunik principality. In 930 the walls of the church were decorated with frescoes, now almost totally lost, which differed from those of the Church of the Cross on Aghtamar Island. In the main apse there was a representation of Christ sitting on a throne and surrounded with three prophets and four saints. The western wall was taken up by an enormous fresco showing the Doomsday, and northern wall, be scenes of Nativity. The figures on the frescoes are monumental and shown in carious complex movements (a man rising from the coffin, a flying angel) which are emphasized by the folds of the attires. The refined color scheme of white, light-blue, yellow and dark red gave the interior a smart and solemn look.

The authors of the frescoes of Pogos and Petros Church, who probably worked together with Western European painters, were connected with a school founded in Tatev at the beginning of the 10th century the students of which studied humanitarian sciences and illustrated manuscripts. The school was of great importance. Presently, similar schools were opened in various monasteries of Syunik, such as G'ndevank, Tsakhats-kar and Bgheno-Noravank. The school played an especially active role in the development of science and art in the 14th-15th centuries, under Ovnan Vorotnitsi (1315-1388) and Grigor Tatevatsi (1346-1411). The latter was not only a well-known nominalist philosopher, but a painter as well. His portrait, one of the rare portraits in Armenian book painting, can be seen in a 1449 miniature in "The Interpretation of David's Psalms". The scientist is shown among his disciples. At the end of the 13th century Tatevatsi created several miniatures for the 1297 Gospel. These miniatures are distinguished by the contrast between bright red and yellow tones and brown and blue ones selected with exquisite taste (the "Annunciation" miniature). The composition is severe and monumental. The faces are thoroughly detailed, and each bears a distinctive individuality. The fine floral and geometrical ornaments in some parts of the miniature add to the decorative value of the composition.

Grigory Church adjoins the main church on the southern side. According to chronicle, the church was built in 1295 in the place of an earlier building of 836-848. Artistically, this is vaulted-hall type of building, widespread in Armenia, with a semicircular apse. Its decoration is very modest. The eastern window of the apse is shaped as two crosses and a circle above them. The entrance portal is decorated with open-work fine geometrical carved ornament typical of the 13t century.

To the west of Gregory Church there was a vaulted gallery with arched openings on the southern side, and to the west of Pogos and Petros Church, a three-tier bell-tower of the 17th century. Characteristic of it was the lightening of sections upwards, which is emphasized not only by the shape and cross-section size of the abutments, but also by the size and proportions of the arches bridging them. The ground floor is heavier than the middle one which was a transition to the light eight-column belfry with a pointed round roof. Correspondingly, the decoration of the bottom tier was higher than that of the top one. 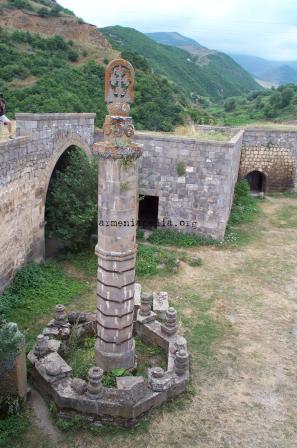 The monument "Gavazan", erected in 904 in the yard, near the dwelling premises of the monastery, is a unique work of Armenian architectural and engineering art. This is a octahedral pillar, built of small stones; eight meters tall, it is crowned with an ornamented cornice, with an open-work khachkar towering on it. As a result of seismic tremors, and even at a mere touch of human hand, the pillar, hinge-coupled to a stylobate, tilts and then returns to the initial position.

The square-shaped Church of Astvatsatsin, dating back to the 11th century, is of a type rare in Armenian architecture. It is a small domed hall with niches on all the facades except the western one, and its proportions are vertically oriented. The dome drum has a pointed round roof.

The chambers of the Father Superior, the vaulted-hall refectory with a kitchen and storerooms, the dwelling and service premises form an almost complete circle around these structures. They were capitally rebuilt in the 17th-18th centuries. There were many secret depositories in solid rock.

Tatev craftsmen created works of applied art. The golden setting framework of Tatev Gospel merits special mention. This is an example of the 17th-century chasing. It shows scenes from the Gospel and portraits of Tatev scientists - Ovnan Vorotnetsi and Grigor Tatevatsi (now in the museum of Echmiadzin Cathedral).

The door of Tatev Church is an outstanding work of woodcarving art (1253 and 1614, the State History Museum of Armenia). The folds and jamb of the door are carved all over with an intricate geometrical ornament interspersed with small floral patterns. In the center of the 1253 door there is a large representation of the cross over a large shield-like circle with two 16-petal rosettes on its sides. On top of it there is a three-line inscription.

Tatev ensemble fits in perfectly with the mountainous landscape around it. A large church, dominating the surrounding structures and visible from afar, is the architectural and artistic center of the ensemble. The residential and service premises, arranged in a single row on the perimeter, set off the polyhedral rock foundation and seem to be an extension of it. This gives the ensemble an original and majestic appearance. 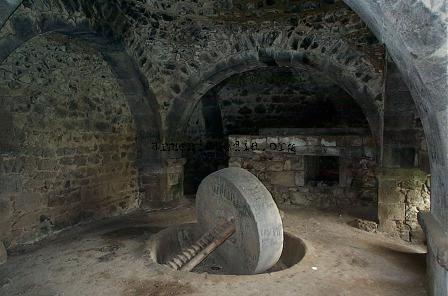 Tatev Monastery - mill in outside buildings 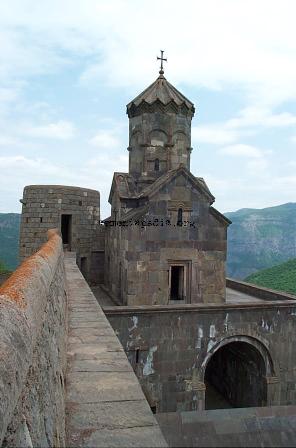 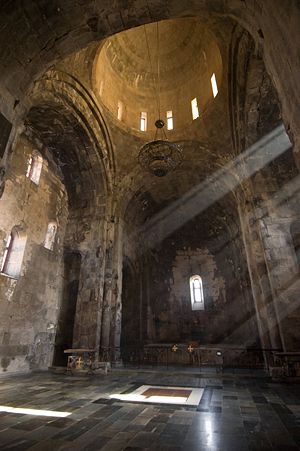