Difference between revisions of "Stepanakert" 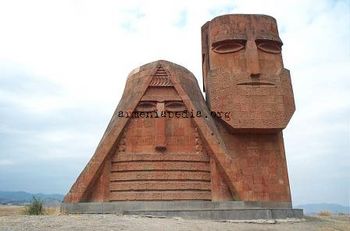 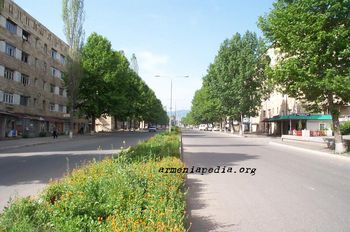 An avenue in Stepanakert

Nestled in a bowl of mountains, Stepanakert (Ստեփանակերտ) is the capital of the Nagorno Karabakh Republic. It was originally known as Vararakn (Վարարակն or "rapid creek" in Armenian) during the medieval era and was later renamed Khankendi (Xankəndi or "khan's village" in Azerbaijani) in 1847. Its present name was assumed in 1923 and was derived from Stepan Shahumyan, an Armenian Bolshevik. 1923 is also the year Stepanakert was made the capital of Karabakh.

Karabakh has a population of well under 200,000 people, which means the capital of Stepanakert, with an estimated 40,000 residents is more a large town than a city. There is not too much to see in Stepanakert, but it is centrally located in the republic and makes the perfect base for day trips to any site. You can stay in other cities to cut down the daily drives, but there are only a handful of western style hotels outside of Stepanakert and Shushi. Stepanakert is the best base for day trips to Gandzasar and Shushi, the roads to these sights are in perfect condition. There is a new north-south highway in Karabakh linking Martakert in the north and Hadrut to the south, with Stepanakert right in the middle. Other roads may be in very bad condition or completely unpaved.

The main tourist site in Stepanakert is in the outskirts, on the western side of the road leading northwards. It is the monument called popularly "Mamik and Babik", an old Armenian man and woman hewn from rock. They represent the mountain people of Karabakh. Aside from this there is also a small museum (tankaran) near the main open market (shuka), where you can try local specialties like Jingalov Hats, mulberry raisins, mulberry vodka and other goodies. The main square of town with a Hotel Armenia, Parliament building and a popular park are a good place to see the locals strolling in the evening.

For official information on Karabakh, visit the government web site at http://www.nkr.am (which is supposed to be mirrored on the more reliable server http://www.artsakh.org ) or e-mail the Ministry of Foreign Affairs: info@mfa.nk.am You can enter without visa and can buy it at the Ministry of Foreign Affairs; it is issued on the spot. They usually give you a road permit, valid for Gandzasar, Shushi, Dadivank but usually not Aghdam.

In Stepanakert there are a number of good options in terms of accommodations, but in the high season the good places can fill up quickly. See the Armenian Hotel Directory for accommodation options.

There are a number of restaurants in Stepanakert to suite various tastes and budgets. These are a couple, but you should ask around and just try a place that looks good.

-Tsitsernak restaurant is in the outskirts of town, and has nice traditional khorovadz for a few dollars a person. When pomegranates are in season (fall) you must try the pork khorovadz which comes with fresh pomegranate and lemon juice to make a very delicious light and fresh tasting Armenian sweet and sour pork.

-There is a restaurant across from the open market (shuka) in a section of a larger building that is no longer used. This restaurant has excellent borsht (cabbage and lamb soup), belmeni (Georgian raviolis) good khorovadz and actually a good atmosphere, with a kind of seaside, fisherman theme. This restaurant costs about a dollar a person, depending on meals.

-There is a little eatery inside the the open market (shuka) which has excellent meals for under a dollar. It can be hard to find, and often times you just eat whatever they have decided to prepare that day, but you will really like it. They often prepare sandwiches, mashed potatoes, cutlets, and other simple dishes and great desserts, while you can just about always order eggs and such. To find this eatery you should enter the markets right side entrance, where they sell lavash bread and often jingala bread (a local bread with greens inside well worth a taste). From the entrance, go the short distance to the right and start walking along the shops on the outer edge of the market until you are approaching the back of the market. Around here is the hard to spot eatery on your right, with a counter which usually has a cake or two on it, a few tables, and a stall to change clothes in.

-Green Bar has pizza as well as a number of other dishes at medium prices with a menu in Armenian and Russian.

The dream of the inhabitants of the capital of NKR to have a church in the city will soon fulfill. On September 15 the foundation stones of St. Jacob Church near Hekimian Street in Stepanakert were laid. At the ceremony of confirmation churchmen of Artsakh Diocese of the Armenian Apostolic Church, officials and believers were present. The Armenian benefactor Vache Yepremian from Los Angeles who will sponsor the construction of the church was also present. After washing with water and wine and anointing with chrism the 16 stones symbolizing the 13 apostles, 2 evangelists and Gregory the Illuminator were placed in the foundation of the church. Vache Yepremian said the idea of building a church in Stepanakert occurred during his talks with Archbishop of Artsakh Parghev Martirossian; he was surprised to learn that there was no church in Stepanakert. The construction of the church will last till next spring. And in the second half of October the foundations of the cathedral will be laid. Its construction will probably last for 2 - 3 years.

On May 9 the foundation of St. Astvatsatsin Church will be laid in Stepanakert. The Artsakh Diocese of the Armenian Apostolic Church has provided 140592000 drams for building. The total cost is 765 million drams. The church is reported to be built in the center of Stepanakert. The old building, as well as some other houses nearby will be pulled down after the new building of the polyclinic is ready. In this houses a number of people are registered, and pulling them down will bring about tremendous costs.

There is not a traditional church in Stepanakert. The believers attend the church in the building of the House of Culture. In another part of the city a small church is being built on the funds of a sponsor. In the old part of Stepanakert there is an ancient church which is said to have been built under King Vachagan. Other historians say the church was built in the 18th century. This church is not operating and is in private land.

These are Armenians who were born or who have lived in Stepanakert: