Difference between revisions of "Stepan Partamian" 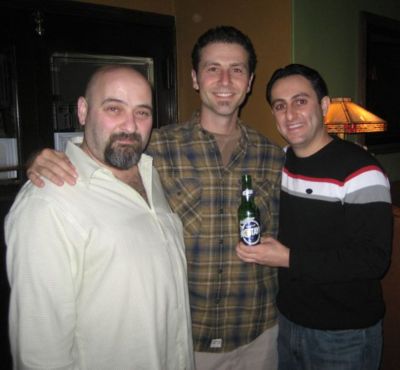 Stepan on left at a Kotayk Knights event in 2007.

In fall 2006, Partamian announced that he would be moving to Armenia in 2008 where he plans to write a book on Armenian culture.

To get a quick view of his website, please check out http://www.thearmenian.com

Don’t get Stepan Partamian started, but if you do you can be guaranteed that controversy is sure to follow.

Host of two Glendale cable televison shows—Pari Looyce(Good Morning) every morning and Tzer Gardzeke (Your Opinion) on Thursday nights—Stepan, says the Los Angeles Times, is a “firebrand,” who “is bound to say something that will push the hot buttons?”—boy, is that an understatement.

The Beirut-born entrepreneur is one of the most active promoters of Armenian culture in Southern California, but for seven years his fame—or infamy, depending on who you ask—has multiplied as he unabashedly challenges conventions that make Armenians think twice.

“If I tried to look up the word ‘hypocrite’ in the dictionary I find the word Armenian, I hate that,” he rails in response to my question as to what was so wrong with the Armenian community.

“Let’s start with Christianity, we are all proud that Armenia was the first Christian nation but Armenians don’t typically follow the word of the Bible—and by the way, Christianity isn’t the property of Armenians alone…there are Chinese Christians, Swedish Christians, we must have something more to our culture than that,” he fumes.

“And how about our Armenian schools. We are so proud of having Armenian schools, and we beam with pride when one child recites an Armenian poem at the year-end hantes [recital]. But what about the other hundred students who can’t do that, who never really learned Armenian, or learned it badly?” Stepan says in his typical bravado that raises more questions that it answers.

A graduate in film and television from Cal State, Northridge, he admits that he attended school for the degree, because Armenians love to evaluate others by their education. “I never aspired to be a Hollywood star, everything I do is Armenian and about that reality. The community does not appreciate Armenian cultural output but if I wanted to be the best Persian pop star or American comedian they would appreciate me,” he claims.

Some may want to dismiss his criticism as typical of curmudgeons that pepper the Armenian community, but Stepan puts his money where his mouth is as a promoter and a die-hard supporter on the region’s Armenian scene.

As a promoter he was often asked to appear on Armenian shows, so he thought why not work on his own? Seven years ago, Tzer Gardzeke began and last year Pari Looyce debuted.

So, now with two cable venues that ask the tough questions, Stepan is primed to get people talking.

Not one to be self-aggrandizing, he prefers to speak frankly, “Let’s stand up and say we are ignorant so that one day we can be educated, we must start with truth,” he insists. “I think as Armenians we are odar-a-mols [foreigner-lovers], we don’t support our own, that’s a problem.”

Stepan has even penned an English-language one-man show that will tour America entitled, The Armenian based on his TV persona.

Always looking to expand and reach out to new audiences, Stepan has begun placing the most recent broadcasts of his weekly show on his website, www.armenianarts.com.

An impassioned advocate, Stepan knows he’s delved deeper into the state of Armenian identity than most Armenian Studies graduates. “I feel like I deserve a Ph.D. on being an Armenian,” he jokes.

There is absolutely something totally wrong with this man, and i think it is ridiculous that he has his own reality show and he continually disrespects, ridicules the Armenian Community.