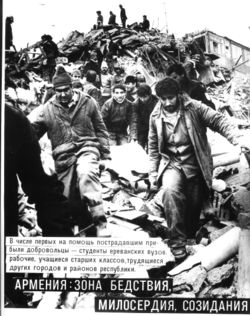 The massive earthquake that struck Armenia on December 7, 1988 at 11:41am was epicentered in Spitak, taking at least 25,000 lives. Measuring 6.8 on the Richter Scale, the many poorly constructed Soviet buildings across the region sustained heavy damage or collapsed.

Since most of the hospitals in the area were destroyed, and due to freezing winter temperatures, officials at all levels were not ready for a disaster of this scale and the relief effort was therefore insufficient. The Soviet Union allowed in foreign aid workers to help with the recovery in the earthquake's aftermath, and this was one of the first cases when rescue and relief workers from other countries were allowed to take part in relief works in the Soviet Union. Gorbachev cut short a visit to New York City in order to visit the disaster area and left the disaster area angry that locals were asking him about freedom for Karabakh Armenians. He promised to have all of the damaged areas quickly rebuilt.

The outpouring of aid from both private individuals and governments around the world was very generous, though much of it had a great deal of trouble reaching Armenia through Azerbaijan which was blocking and damaging shipments.

The last of those homeless due to the earthquake were either given new apartments by the Lincy Foundation or given vouchers to purchase home by the Urban Institute by funds granted by USAID (in 2003).