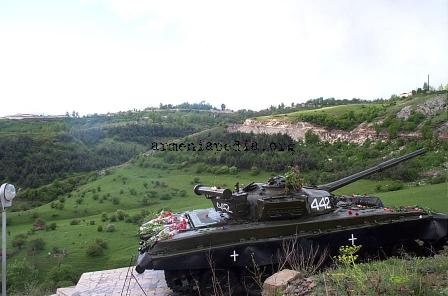 That's Shushi, not sushi. The residents have no idea that sushi even exists in this ancient walled town that is historically the cultural capitol of the region. To this day it is very important, housing the beautiful Cathedral (and Bishop) of Karabakh. The Azeri population fled years ago and only the 3 mosques and numerous destroyed buildings testify to the fighting and subsequent drop in population. This was one of the few towns here with a mixed population, towns and villages tended to be more homogenous.

Shushi is unavoidable en route to Stepanakert via the Lachin corridor. It is well worth a stop and some exploration however, so plan on spending a couple of hours there. You can take a cheap bus ride from Yerevan, although most people hire a private driver. The main attraction is the newly restored Cathedral, which is a pristine white, very large and attractive. After seeing so many monasteries in Armenia built from tuff stone, this stands out quite a bit. There is also the Ganach Jham Church which you can see from the Cathedral and head up to. Of the mosques, you should at least visit Verkhiya Mosque which will allow you to climb up the minarets and get a great view of the town and area, including the valley which Stepanakert lies in. Stepanakert and surrounding areas were barraged with bombs from this vantage above the surrounding plains until it was finally captured. The damage to Stepanakert during the war is mostly repaired, but the extensive damage to Shushi is mostly still apparent and you can explore these ruins which are so odd to see interspersed among occupied homes and businesses. Most of the buildings are of white stone, in the traditional architecture of the region, and much more attractive than the newer, soviet constructions.

In the summer of 2001 a new western standard hotel called N'ran Hotel (Hotel of the Pomegranate) opened up in Shushi.