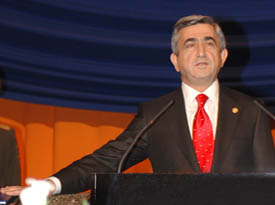 Date and Place of Birth

Both Aleksanian and the fuel importers are thought to be operating under the tutelage of Kocharian's most powerful associate, Defense Minister Serge Sarkisian. The volume of their commodity imports shown in the official statistics has long caused suspicion. Many in Armenia wonder, for example, why fuel imports to the country have remained largely flat in recent years despite a substantial increase in the number of cars.

The fact that Armenia's notoriously corrupt customs agency is run by another Sarkisian protégé, Armen Avetisian, does not add to the credibility of the official figures. Avetisian publicly (and proudly) admitted on April 15 that all of the big importers are his friends.