Difference between revisions of "Serzh Sargsyan" 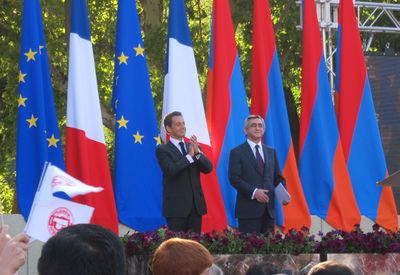 Sargsya on right in Yerevan with Nicolas Sarkozy.

Date and Place of Birth

Both Aleksanian and the fuel importers are thought to be operating under the tutelage of Kocharian's most powerful associate, Defense Minister Serge Sarkisian. The volume of their commodity imports shown in the official statistics has long caused suspicion. Many in Armenia wonder, for example, why fuel imports to the country have remained largely flat in recent years despite a substantial increase in the number of cars.

The fact that Armenia's notoriously corrupt customs agency is run by another Sarkisian protégé, Armen Avetisian, does not add to the credibility of the official figures. Avetisian publicly (and proudly) admitted on April 15 that all of the big importers are his friends.

"DARING CHANGES" AHEAD DECLARES PRESIDENT SARGSYAN WHILE ADDRESSING THE NATION

Friday, October 3, 2008 - YEREVAN - In a 40 minute speech before the nation, President Serzh Sargsyan stood at the speaker's podium in the National Assembly Thursday evening and presented his administration's intention to implement `daring changes' to drastically raise Armenia's competitiveness as it faces a new era of `serious geopolitical and regional changes.'

Addressing the republic's top leadership, including the Cabinet of Ministers and the Prime Minister, the chairman of Constitutional Court, the secretary of the National Security Council, the chairman of the Central Bank, Armenia's human rights Ombudsman and others, President Sargsyan spoke of problems facing the Armenian state and society today and called for drastic changes to face up to the challenges of the modern world.

The Russian-Georgian conflict in August sent shockwaves throughout the region. The conflict shattered the territorial integrity of the Georgian state, raised fears over the security of oil and money flowing from Caspian ports in Baku to their Mediterranean counterparts in Turkey, and jolted landlocked Armenia to the reality that over 70 percent of its trade goes through Georgian ports.

The reassertion of Russian power in the Caucasus and Turkey's rapid push to establish a Caucasus platform to manage relations in the region has caused a diplomatic frenzy and a series of bi-lateral meetings between leaders from different countries in the region.

Meanwhile, a trilateral meeting between the foreign ministers of Armenia, Turkey and Azerbaijan on sidelines of the UN General Assembly late last month is now raising the specter of a possible move by the three countries to try and normalize relations, open the borders, and resolve the Nagorno-Karabakh conflict.

Sargsyan said that the events in South Ossetia and the ensuing war in Georgia had `a sobering effect' on many in the region. `Let's look around; the foreign threats have not subsided.'

`Our republic is entering a new phase of its history, Sargsyan said. `In this new period we witness serious geopolitical and regional changes. A war in our neighborhood, closed borders, problems of external communication, regional relations getting complicated, and a clash of superpowers' interests.'

This is the reality Armenia finds itself in today, he stressed.

Under these new circumstances, Armenia must exclude `any possibility of stagnation in any sphere,' he said.

`But have we completely sobered up after the latest events?' he asked, noting that he sometimes gets an impression that Armenian society criticizes problems but remains a mere spectator to them.

`Today, it is more than obvious that we need not only to20make a clear, pragmatic, non-emotional and adequate evaluation of the situation, but also make consistent steps to pursue far-reaching goals,' Sargsyan said. `We need stability in the country, unification of strength and opportunities, new approaches and solutions.'

He spoke of the current malaise in the Nagorno-Karabakh conflict settlement process, highlighting the harsh reality that a state of war hampering Armenia's possibilities, continues to exist in the region.

`The war has not ended as long as there is an arms race,' Sargsyan said, talking about Azerbaijan's oil-funded military buildup. `The war will not be over, until the arms race comes to an end, until we all congratulate the Presidents of Azerbaijan and Nagorno-Karabakh for their willful decision and peaceful resolution of the conflict.'

During his speech, which focused largely on Armenia's economic development, Sargsyan's promised to make the Armenian economy more competitive and ensure fair business competition. He said the economic situation in the country will also improve as a result of large-scale projects.

He singled out three initiatives that he said will be in the center of the government's attention in the years to come. Among them is the launch of construction, in the coming months, of a new nuclear plant in place of the aging Soviet-era facility at Metsamor; the start of constructi on on a railway linking Iran and Armenia; and the establishment of an all-Armenian bank and an investment foundation to fund large-scale economic projects.

`The time has come for Armenia to implement large and daring initiatives,' Sargsyan exclaimed, adding that such programs not only solve important strategic issues, but also have a broad influence on the economy and the society, creating thousands of new jobs, opening new markets and encouraging the development new enterprises.

`Construction of the Iran-Armenia gas pipeline is the best proof of the fact that even the most daring objectives can become reality in our country due to consistent work and confidence in our abilities,' he assured.

`Today we can state the fact that over the years our country has learned to stand firm on its feet even under the most unfriendly environment,' Sargsyan said. `In a short period of time we should essentially raise the global competitiveness of Armenia. We should be able to raise the competitiveness of branches of our economy--our companies, our whole economy and human resources. We must be competitive and the advancement of Armenia should be our supreme objective.'

A Fight Against Corruption

Sargsyan promised to meet the coming challenges by transforming Armenia into a rule-of-law country with a competitive economy, independent judiciary and equal opportunities for all citizens.

The president called on the lawmakers gathered in the National Assembly to help him `build a society of resourceful and competitive individuals where there is no place for corruption, where corruption is simply not beneficial and illogical.'

`We will criminalize any manifestation of corruption. We will create a culture of absolute public intolerance towards corruption,' he added.

`The fight against corruption will change its face,' he said. `We will switch to tougher and more uncompromising methods and a system of international standards.'

`The level of identifying and prosecuting abuse of power will rise irreversibly,' he said, promising high-profile prosecutions of corrupt officials.

Sargsyan stressed the importance of public support for this endeavor but made no mention of the lingering political crisis triggered by last February's disputed presidential election. His sole reference to the tense domestic political situation was an appeal to pro-government and opposition parties and media to stop offending each other in public.