Difference between revisions of "Serj Tankian" 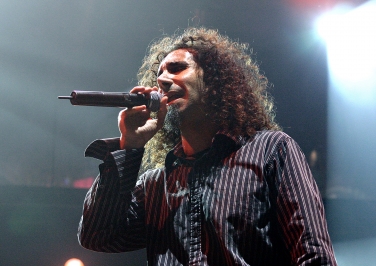 Serj Tankian (born August 21, 1967) is a Armenian-American musician born in Beirut. He is a member of the rock band System of a Down, a name inspired by a Daron Malakian poem titled "Victims of a Down". In addition to his current singing duties with System of a Down, Serj has started his own record label, Serjical Strike, in an effort to release music otherwise ignored by the mainstream. The first act on this new label is a side-project dubbed "Serart" featuring Serj himself and famed world-musician Arto Tuncboyaciyan. His first poetry book Cool Gardens was published by MTV Books and features artwork by fellow Angeleno Sako Shahinian.

An outspoken musician, Serj has spoken out against violence and injustice abroad. On September 13, 2001, shortly after the attacks of September 11, 2001, Serj penned an essay, which he posted on the official System of a Down website, titled "Understanding Oil". Promptly removed by Sony, the essay was seen by many, still shook by the attack, as justification for the terrorists' actions. However, the essay advocated peace and the research and development of alternate fuels. Shortly after his essay was removed, Serj appeared on the Howard Stern show via telephone to explain his position; unwilling to budge in their pro-war stance, however, the crew, and listeners who phoned, repeatedly interrupted him with their opinions on what should be done and their reasoning for retaliation.