Difference between revisions of "Serbia"

Armenians were recorded in Serbia in 1218 when Saint Sava invited constructors to build a Serbian Orthodox monastery after he had been to Armenia and seen the beautiful Armenian architecture. They were to build Vitovnica Monastery, which has preserved a bilingual sacral text in Serbian and Armenian dating back to it’s construction period.

Armenians were a small part of the Ottoman Turkish army when they invaded Serbia prior to the Battle of Kosovo in 1389. However, upon hearing that they would attack a Christian people, they fled the Ottomans to fight alongside the Serbs against the oppressive empire. After the battle, the surviving Armenians settled in the hills of Sokobanja where they built Jermenčić Monastery.

Evliya Celebi registers an Armenian “district” of Užice in the 17th century.

Remains of an Armenian graveyard lie in Kalemegdan fortress, which was last used in the 17th century after its destruction at thhands of the Ottomans. Only a few tombs are left in recognizable condition. In 1810 the Turks destroyed the Celije Monastery, which the Serbs rebuilt it in 1811 with the help of wealthy Armenians. One of the benefactors had his idea of an Armenian architecturally styled dome included in the work, so the monastery today can be considered an outcome of Byzantine/Serbian-Armenian architecture.

In the 1880s, merchants from the Gamakh region in Armenia settled in Valjevo (Tehlirians).

During the Second World War, many Armenians moved to North America and France.

Some 500 female Serbian descendants of Armenians married Serbs in the 1990s.

On July 28, 2009, Boris Tadic arrived in Armenia as the first Serbian Head of State visit to Armenia. The presidents wished to improve the spiritual, cultural and economic relations of the two countries, stressing the centuries long friendship between the peoples is a good foundation for boosting bilateral relations. Armenia has not recognized the unilateral declaration of independence of Kosovo.

Today, there are about 300-350 individuals of Armenian origin living in Serbia.

The Armenian Catholic shrine used to stand in the very heart of the old city center. Its demolition in 1965 only followed those of Saint John Nepomuk in the city harbor, and the Jovanovska Church in the so-called Jovanovski kraj, the area where the Social Security Office stands today. The church was built by first Armenians who had come to Petrovaradinski Šanac ('Petrovaradin Trench') from Belgrade in 1739, together with Greeks, Germans, Aromanians and Albanians. Traditionally, their main occupation was banking and finance. Due to the fact they were primarily Catholics, Armenians culturally inclined more towards western influences. Their church was dedicated to St Peter and Paul, and not far from its former location one can still find the monumental marble tomb of the Čenazis. By the mid-19th century, the Čenazi noble family, as well as numerous other Armenians of Novi Sad, had already started assimilating and disappearing. The church had suffered serious damage in the 1849 bombardment, only to be later reconstructed by Marija Trandafil Popović.

Khachkar at site of razed Armenian Church of Novi Sad 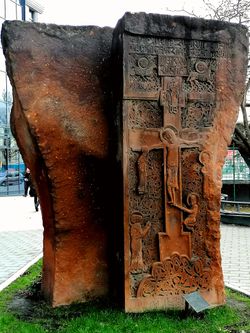 The former site of the Armenian Church in Novi Sad now has a that was placed to memorialize the Yugoslavian team that crashed and died in Armenia while bringing aid to the 1988 Spitak Earthquake victims.

Belgrade, 31 December 2006 - Serbia has secured Russia's consent to proceed with a planned arms deal with Armenia, defusing earlier objections from Moscow that caused upheaval at a Serbian weapons manufacturer, the president said Friday.

President Boris Tadic said "the issue has been successfully resolved" in his meeting with Russia's ambassador to Belgrade, Aleksander Alexeyev, who has given "a positive response" to Serbia's appeal that the Zastava arms company is allowed to sell guns and rifles worth US$2.55 million (€1.94 million) to Armenia.

Earlier this month Zastava criticised the Serbian government for withholding permission for its previously arranged sale to Armenia, allegedly because Russia — Serbia's traditional ally — objected to the Serbian supplier venturing into a market usually supplied by Moscow.

Zastava, based in the industrial city of Kragujevac, 90 kilometers (55 miles) southeast of Belgrade, is majority state-owned but its management enjoys some autonomy in negotiating arms deals. Actual exports, however, can be completed only with a government clearance.

Zastava's unionized workforce of 2,600 has been on strike, demanding financial compensation from the government because of the blocked sale to Armenia. Defense officials have flatly rejected the demand.

The dispute deepened this week when 80 Zastava workers seized control of Kragujevac city hall, saying they would keep up their protest until the authorities either approve the export or cover any loss caused by the ban.

There was no immediate comment to Tadic's announcement from Zastava managers or protesting workers.

The issue has become an embarrassment for Prime Minister Vojislav Kostunica ahead of Jan. 21 parliamentary elections. Tadic is his political rival, heading the opposition Democratic Party that currently leads in opinion polls.

Serbian President Tomislav NikoliÄ~G noted the aforesaid at his meeting, on Thursday in the Serbian capital city of Belgrade, with Armenian Foreign Minister Edward Nalbandian.

NikoliÄ~G added that the Serbian and the Armenian peoples are connected to one another by historical friendly similarities.

In turn, Nalbandian conveyed to President NikoliÄ~G the best wishes by Armenian President Serzh Sargsyan, and expressed confidence that the Serbian leader's forthcoming visit to Armenia's capital city Yerevan will give new impetus to the expanding and deepening of cooperation between the two countries.

During the talk, the interlocutors stressed the willingness of both sides to further promote Armenian-Serbian relations, and underscored the establishment of reciprocal diplomatic representations in the two capital cities.

Tomislav NikoliÄ~G and Edward Nalbandian also exchanged views on several regional and international matters and the avenues for their resolution.