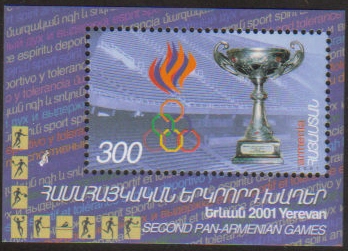 The Second Pan-Armenian Games took place on August 18-26, 2001. They had already competitions on 9 kinds of sports. Futsal and swimming were added to the program of the Games. Sport delegations from 29 countries arrived in Yerevan.

This time the Executive Committee was governed by then Minister of Culture, Youth and Sport Roland Sharoyan. Amazing gala-concert was first organized for the participants and guests of the Games on a special "Free Day" were added to the traditional lighting of the fire in Garni temple and beautiful Opening and Closing ceremonies.

Traditionally that "Free day" begins with taking flowers to the Genocide, visiting Armenian Genocide Museum and visiting the church of the Holly Gregory the Enlightener and ends with the above mentioned gala-concert in Sport and Cultural Center after K Demirchyan.

During the opening of the Games the torch was brought in by Olympic champion Oksen Mirzoyan. The Games 2001 continued the tradition of electing "Miss Pan-Armenian Games". This time the title was given to 16-year-old volleyball player from Istanbul Maral Atal.