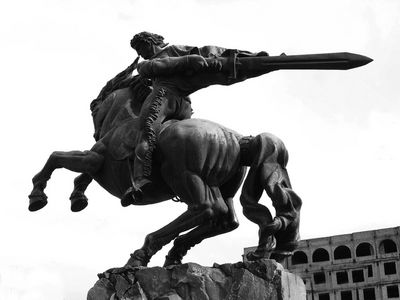 The statue of Sasuntsi Tavit (David of Sasun) on horseback is located at the Sasuntsi Davit Metro station on Tigran Mets Street in Yerevan. He was a mythological figure, famous thanks to an epic poem about him of the same name, originally .

In the centre of the square, surrounded by the Railway Workers’ Cultural Centre, a cinema and residential blocks, stands the statue of David Sasuntsi, hero of the Armenian folk epic poem. The sculptor was Yervand Kochar.

The image of David, who fearlessly defended his people from foreign invaders, is similar to that of the warriors in Russian folk legends. In 1938 many people in the Soviet Union celebrated the millennium of the legend of David Sasuntsi.

From generation to generation, from century to century, people have handed down tales of David’s deeds, his gigantic strength. The episode of the crucial battle when David, unwilling to shed the blood of the enemy soldiers, challenged their leader Msyrmelik, ruler of the Arab caliphate of Msyr, to a duel and defeated him, is particularly enthralling.

The warrior-like figure of David Sasunsky astride his faithful steed Dzhalali embodies the freedom-loving aspirations of the Armenian people over many centuries. His hands hold his sword of lighting, ever ready to repel invaders; water flows from the bowl above the pedestal, signifying that when the cup of the people’s patience overflows, there is no quarter for oppressors and enslavers.

Much has been written about the statue of David Sasunsky. Since the time of its unveiling in 1959, it has travelled the whole planet over, depicted on postcards and magazine covers, in booklets, photographs, and illustrations to books and travel guides. It has become a symbol of the Armenian people’s love of freedom and of their capital, Yerevan.