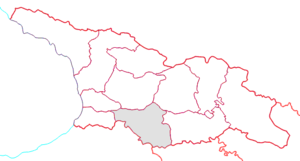 Location of Samtskhe-Javakheti within Georgia

AKHALKALAK, SEPTEMBER 28, NOYAN TAPAN - ARMENIANS TODAY. The Council of Armenian NGOs of Samtskhe-Javakhk made a statement, in which it opposed the statements of Deputy of Georgian parliament Van Bayburdian in connection with the third public forum of Samtskhe-Javakhk held on September 24 in Akhalkalak.

In particular, Van Bayburdian expressed an opinion that the proposal made by the forum regarding giving autonomy to Javakhk is ungrounded and the Georgian power gave all authorities for ruling on the spot to Akhalkalak and Ninotsminda.

Blaming Van Bayburdian for "incompetent statements and indecent" steps, the Council of Armenian NGOs of Samtskhe-Javakhk persuades him to study the Georgian legislation and then declare what authorities Akhalkalak and Ninotsminda have. "Van Bayburdian must also know that the resolution adopted by the forum refers to all the settlements of Samtskhe-Javakhk and Kvemo-Kartli populated with Armenians and not only to 2 regions," the statement spread by the A-Info agency read.

The Council highlighted that the resolution adopted by the third public forum of Samtskhe-Javakhk suggests giving such a status to Javakhk in Georgian state structure which is suggested to South Ossetia by the Georgian authorities. "If the authorities are ready to give the widest autonomy to 40 thousand Ossetians living in South Ossetia, so 150-200 thousand Armenians living compactly in Georgia also deserve autonomy, especially as they have always observed the laws and never raised arms against the state," the document read.

The Council is convinced that the bases of complicated situation in Javakhk are mainly and first of all political and "in this respect also Van Bayburdian living far from Javakhk and being unaware of Javakhk problems misunderstood the situation."

"It's still obscure how the person praising Shevardnadze's power and considering it irreplaceable since the days of Soviet Georgia, appeared in independent Georgia in Sahakashvili's team having overthrown the very Shevardnadze. The Council is convinced that Van Bayburdian is a puppet in the hands of some dark forces and proceeding from his own interests he can instigate destabilization of the situation and hatred in Armenian-Georgian friendship," the statement read.

Excerpty from: The Messenger, Georgia
Sept 29 2005

Calls this month by the Akhalkalaki-based Armenian organizations Javakhk and Virk demanding that Javakheti region be granted autonomy and its own parliament have revived Georgia's deep-seated paranoia over separatism.

The organizations are trying to give their entreaty a peaceful and constructive character and have argued simply that if Tbilisi is offering similar perks to South Ossetia and Abkhazia, why not to other regions. But as Georgia's history shows, the idea of autonomy has involved at best simmering rivalry toward the central government (as in the case of Aslan Abashidze's Adjara) and at worse bloody conflict. The forum that was held in Akhalkalaki irritated the Georgian media and was regarded by many as an event staged by Moscow.

Reactionary print media, in turn, has called on the government to pay serious attention to statements.

The authors of the resolution adopted in Akhalkalaki state that the Georgian government makes representatives of ethnic minorities live in unequal conditions. Moreover the authorities have proposed models for autonomy to minorities in conflict zones that they do not offer to other ethnicities who constitute a majority in other regions.

Representatives of Javakhk and Virk have not decided yet what to demand - autonomy for the region, or to pin their hopes on the establishment of a Georgian federation and becoming a constituent entity of said federation.

"This can be autonomy, but if there is no autonomy then there can be a region with the rights of autonomy with its own constitution. It should be distinguished just what rights the region will have. I propose that this region should have its own parliament, government and laws," stated representative of Javakhk Manvel Saltenian, as quoted by Kronika, whereas Virk member Khachatur Stepanian demanded that Javakheti be given the status of "federation subject."