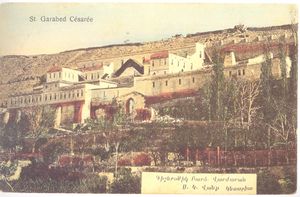 Surp Garabed Monastery of Gesaria was located in the village of Efkere. Efkere is located approximately 18 kilometers northeast of Kayseri (Gesaria), Turkey, at 38.78o latitude and 35.67o longitude (38o46'60N, 35o40'0E), at an altitude of 4311 feet. The region is now referred to as the Bahcelli district of the town of Gesi, which is a part of the greater Kocasinan district of Kayseri.

It is known that the monastery located in this village, Surp Garabed, dates from at least the 12th century, and some Armenians hold that the monastery was founded by St. Thaddeus in the 1st century. Others believe that the village was founded by St. Gregory the Illuminator, who is said to have rested here when traveling from Caesarea to Armenia at the beginning of the fourth century.

The following list of graduates of Surp Garabed Vank is taken from Arshak Alboyadjian's book, Badmootiun Hye Gesaria. I am indebted to Denis Der Sarkisian of France for kindly translating most of these names. Also included next to many of the names of the students is the village or town that they were from. Note that "Gesaria" is the Armenian term for Kayseri. Some brief notes made by Alboyajian in the 1930s are also included. Alboyajian noted that "Hmayag Oughourlian and Garabed Aprahamian have carried out a study in the 1928 Almanac of the National Hospital (pgs 221-262) entitled St. Garabed's Monastery and College of Gesaria and Bishop Drtad Balian, where they have published a list of graduates (pgs 254-259), which I have used. But I find it necessary to mention that having been compiled based on memory, it is full of mistakes. Using notes in the accounts of Bishop Drtad Balian, and information obtained from the press, I have corrected them to the best of my ability."