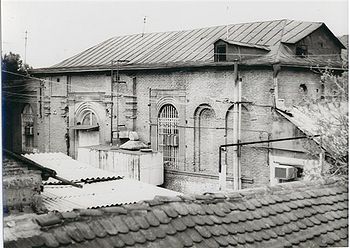 In the sixth chapter of our work briefly dwell on the last of the five so-called "controversial" Armenian churches in Tbilisi, that is, those churches that have survived to this day have not been torn down by militant atheists in the Soviet period, or destroyed utterly modern Georgian chauvinists, or do not have time to like many others, become Orthodox chapel. We are talking about St. Minas.

The church was founded in 1790 and was based on population means Havlabar. As the name implies, to the base or the construction of the church had a direct bearing on migrants from Yerevan. In this case, in addition to the original place of residence of migrants, we also see the actual stages of resettlement. This, in particular, can explain the appearance of the name of the church "St. Minas Old Yerevan" (date of foundation - 1811) in contrast to the monastery, which began to use the newly arrived immigrants. What these names have been dictated, and what they are determined, we have already been discussed in detail in chapter four of this work.

Originally the temple was small. After entry into the Russian Empire, having the status of the provincial center and the unofficial capital of the Caucasus, Tbilisi city began to develop rapidly, increasing the size of the city, industrial development increased the number of its inhabitants, and, accordingly, increased the number of parishioners of churches of Tiflis. There was an urgent need to build a new spacious place of worship. In 1870 the old church building was destroyed, and in its place was a rapidly rising new church St. Minas.

The celebration of the new church took place January 2, 1883.

In Soviet times the church is deprived of the dome, and in the church building are factory shop.

In independent Georgia, the fate of non-Georgian, and, in particular, the Armenian churches, is unenviable. The newly elected president Gamsakhurdia's willful decision sends all places of worship of the country irrespective of their ethnic or religious affiliation, with the balance of the Council of Religious Affairs to the balance of the Georgian Orthodox Church, which at once becomes the heir to the cultural heritage and significant material resources of all the peoples of the former Georgian Soviet Socialist Republic. The fact that you can not move quickly to "ogruzinit" comes into neglect, is destroyed or vandalized destroyed.

In 2005 in the courtyard adjacent to the building of the church, there was a delegation led by some Georgian cleric. As it turned out, they were employees of the city administration, who conducted inspection of the territory for the privatization of an orphan of the Armenian church. It is difficult to say what could be completed this intrigue around the church, if his defense is not raised by local Armenians living in the neighboring yards. In connection with another attack on the Armenian cultural heritage in a matter of urgency was caused by a representative of the Georgian Diocese of the Armenian Apostolic Church. Through appropriate measures taken, the forthcoming privatization of the Armenian St. Minas was averted. Until ...