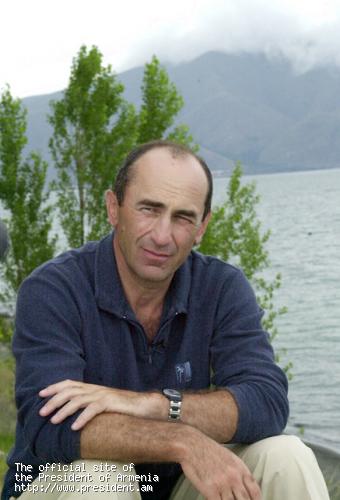 Robert Kocharian started his professional career at Stepanakert’s electro-technical plant in 1971. Having started as a turner, he was later promoted to the post of mechanical engineer. He occupied various posts in Nagorno Karabakh’s youth communist and communist organs from 1980s. In 1989 and the 1990s he was a deputy of Armenia’s Supreme Soviet and member of the Presidium of the Supreme Soviet. In 1991, Kocharian was elected a deputy of the Nagorno Karabakh Republic’s Supreme Soviet of the first convocation.

From February 1988, Kocharian was one of the political leaders of the Karabakh movement. He was a member of the Krunk organization. After the organization was dissolved, he founded and headed the Miatsum [Unification] organization. He was one of the first to assume the responsibility of creating Nagorno Karabakh’s security and defense structure.

On March 20, 1997, Robert Kocharian was appointed to the post of Prime Minister of the Republic of Armenia.

On March 30, 1998, Robert Kocharian was elected President of the Republic of Armenia in early presidential elections.

On March 5, 2003, Robert Kocharian was reelected to the post of the President of the Republic of Armenia.

Robert Kocharian speaks Russian and English. He is married and has three children.

As President, Kocharian continued to negotiate a peaceful resolution with Azerbaijan President Ilham Aliyev on the status of Nagorno-Karabakh. Talks between Aliyev and Kocharian, were held in September 2004 in Astana, Kazakhstan, on the sidelines of the Commonwealth of Independent States (CIS) summit. Reportedly, one of the suggestions put forward was the withdrawal of the occupying forces from the Azeri territories adjacent to Nagorno-Karabakh, and holding referenda (plebiscites) in Nagorno-Karabakh and Azerbaijan proper regarding the future status of the region. On February 10-11, 2006, Kocharian and Aliev met in Rambouillet, France to discuss the fundamental principles of a settlement to the conflict, including the withdrawal of troops, formation of international peace keeping troops, and the status of Nagorno-Karabakh.[1] During the weeks and days before the talks in France, OSCE Minsk Group co-chairmen expressed cautious optimism that some form of an agreement was possible. French President Jacques Chirac met with both leaders separately and expressed hope that the talks would be fruitful. Contrary to the initial optimism, the Rambouillet talks did not produce any agreement, with key issues such as the status of Nagorno-Karabakh and whether Armenian troops would withdraw from Kelbajar still being contentious. The next session of the talks is scheduled for March in Washington, D.C.. [2] Russian President, Vladimir Putin announced his intention to meet with Kocharian in Moscow to discuss the issue. [3]

In a 2001 interview with the Turkish Daily News, Kocharian expressed hope in the spread of recognition for the Armenian Genocide by other nations in the international community. [4]

On March 5, 2003, Kocharian won re-election for a second term as President. However, his re-election was marred by allegations of electoral fraud against both candidates. Some experts, however, contend that any irregularities were not enough to sway the outcome. In early 2004, there were calls for Kocharian's resignation and opposition-led demonstrators took to the streets in support of demands for a referendum of confidence in him.