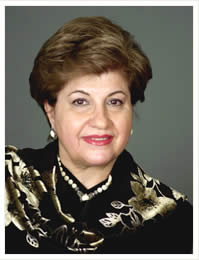 Rita Balian is an educator, businesswoman, political and humanitarian activist, fundraiser, promoter of the arts and culture, avid collector of artwork, and a community leader. She is also a spokesperson for women and children, primarily in the United States and in Armenia.

She is the Founder, President and CEO of the Armenian American Cultural Association, Inc. (AACA), a non-profit charitable organization incorporated in 1995 in the Commonwealth of Virginia.

Through AACA, Rita established the Armenian American Wellness Center in 1997 in Yerevan, Armenia, to introduce American technology and expertise to serve the women of Armenia and the Caucasus region. The Wellness Center is dedicated to saving, prolonging, and improving the lives of women through early and accurate detection of breast and cervical cancer, and to providing primary health care services to ensure the good health and well-being of families in Armenia. To date, over 80,000 women have been screened for breast and cervical cancer, and the lives of thousands have been saved through early detection.

The Wellness Center is currently undergoing its largest expansion to date as part of a $3 million renovation project to incorporate additional medical services that are currently either non-existent in Armenia, or are inaccessible to the general public. Rita Balian’s vision is to create a “Mini-Mayo Clinic” for Armenia and the Caucasus region to promote on-site quality diagnosis and treatment, as well as understanding and compassion among people in conflict.

In response to the devastating 1998 earthquake in Armenia, Rita worked with Congressman Jim Moran (then serving as Mayor of Alexandria) to initiate a sister city exchange program between the cities of Gyumri, Armenia and Alexandria, Virginia. She served as the chair of the sister city committee for six years, organized several exchanges, and established the annual Alexandria Armenian Day Festival.

Since 1986, Rita and her husband Vartkess have co-chaired the Armenian General Benevolence Union (AGBU) President’s Club. They also co-founded the AGBU New York Summer Internship Program (NYSIP) for college students from throughout the world. Rita and Vartkess still manage the internship program, now in its twentieth year.

As philanthropists, Rita and her husband have sponsored many American and Armenian educational, cultural, and charitable institutions, and have been among the largest donors to the Armenian American Wellness Center since its establishment. The Balians also established the Balian Press Award, given annually to Armenians who have demonstrated excellence in journalism.

Rita Balian has been honored for her humanitarian work on numerous occassions. Some of these honors include:

in the house of representatives

Mr. MORAN of Virginia. Mr. Speaker, I rise today to recognize the exceptional contributions of Rita Balian, a humanitarian activist and community leader who has worked tirelessly on behalf of women and children in the United States and Armenia.

Ever since the earthquake in Armenia in 1988, Ms. Balian has dedicated her time, talent and expertise to help the people of Armenia. She has realized many projects in support of women, schools, and universities. Since 1996, she has concentrated her efforts on women's health, taking American technology, management skills and medical expertise to Armenia.

She is the founder, president and chief executive officer of the Armenian American Cultural Association (AACA), a non-profit charitable organization incorporated in 1995 in Arlington, Virginia. Through AACA, Ms. Balian established the Armenian American Wellness Center in Yerevan, a humanitarian project dedicated to saving, prolonging, and improving the lives of women through the early and accurate detection of breast and cervical cancer and to providing primary health care services to ensure the good health and well-being of families in Armenia. To facilitate the Wellness Center's work, Ms. Balian partnered the Center with seven major U.S. medical institutions. Since the Wellness Center's establishment in 1997, it has screened over 60,000 women and saved the lives of over 1,500 through the early detection of life-threatening illnesses.

Ms. Balian has dedicated herself to expanding the services offered at the Wellness Center and providing increased access to those services. The Center has added protocols in gynecology, family medicine, and pathology and reaches out to Armenians living in rural areas through monthly outreach missions and the establishment of two satellite clinics.

Along with her work on behalf of the Wellness Center, Ms. Balian's accomplishments also include the establishment of a sister-city program between the cities of Gyumri, Armenia and Alexandria, Virginia. She co-chaired the Alexandria/Gyumri Sister City Committee for six years, organized several municipal, cultural and educational exchanges and established the Alexandria Armenian Day Festival, which is now an annual celebration.

Through her work with the Armenian General Benevolent Union (AGBU), the largest and oldest Armenian philanthropic organization in the world, Mrs. Balian and her husband cofounded the AGBU New York Summer Intern Program for Armenian college students from around the world. She continues to manage the intern program, which is now in its nineteenth year.

She has received many awards in recognition of her work with the Wellness Center; most notably the ``Spirit of Life Cancer Advocacy Award in September 2003 from the International Spirit of Life Foundation and the Washington Cancer Institute, the ``Outstanding Citizen Achievement A ward from the United States Agency for International Development in January 2003, and the Armenian Church's highest medal of honor, the St. Nersess Shnorhali Medal, bestowed upon her through a Pontifical Encyclical by His Holiness, the Catholicos Karekin II, in October 2001.

The Armenian people have acknowledged Ms. Balian's humanitarian work as well. She has received honorary doctoral degrees from three different universities in Armenia, and in April 1996, Rita and her husband, Vartkess Balian, became honorary citizens of the Republic of Armenia through a special presidential decree presented to them at the Armenian Embassy in Washington, DC.

She has also been honored by the United Nations for her advocacy on behalf of women's and children's rights and by the American Red Cross for her leadership in obtaining humanitarian assistance for the victims of the 1988 earthquake in Armenia.

Since March of 2004, Ms. Balian has served as a member of Governor Warner's Virginia/Armenia Advisory Commission.

Mr. Speaker, I am proud to recognize the numerous accomplishments of Rita Balian. Her dedication to the people of Armenia and her efforts to increase international understanding reflect a deep sense of purpose and remarkable ability to achieve difficult and worthy goals. Her work serves as an inspiration to us all.