The name "Nagorno-Karabakh" itself seems to attests to the region's tumultuous history. The word "Nagorno" (Нагорный or Nagornyj) is Russian for "mountainous." The name "Karabakh" first appeared in Georgian and Persian writings from the 13th and 14th centuries. Many scholars have come to a conclusion that "Karabakh" (or "Karabagh") is a compound of the Turkic "kara" meaning "black" and the Persian "bakh" meaning "garden." However, Tabriz-born cartography researcher Rouben Galichian raises an interesting note in his book Historic Maps of Armenia: The Cartographic Heritage (pub. 2004, p. 210 ISBN 1860649793):

...there are a number of Armenian places that bear the Azeri prefix of "Kara", which in the modern Azeri language means "black". These include Karabagh (black garden), Karadagh (black mountain), Karakelisseh (black church) and Karasou (black water). The names do not seem logical, since Karabagh is a lush and green region, the mountainous area of Karadagh is not black and certainly Karakelisseh (Monastery of St. Thaddeus) is not black but an all-white cathedral, with a black strip of finishing stone on the rotunda of one of its churches.

According to the paper entitled "Tati and Harzani, two ancient dialects of the Azeri language" by the Iranian linguist Abdolali Karang (Tabriz – 1954/5), the word "kara" is a derivative of "kaleh" or "kala", which in the old Harzani language means "large". This could well explain the meaning of the above names. Karabagh – Large Garden, does look like a huge garden, Karadagh – Large Mountain, is a mountainous region with many large and small mountains and Karakelisseh – Large Church, is indeed the largest religious complex in the area, while Karasou – Large River, is a very wide and shallow river. In the local dialect of the present-day Iranian-Azeri village of Gelin-Ghieh, the word used for large is "kala", and even in Persian the word "kalan" means a large amount, which could have been derived from the same root.

Karabakh is often referred to by the Armenians living in the area as "Artsakh" (Armenian: Արցախ), meaning "Woods of Aramanyak" ("Tsakh" is Armenian for Woods, "Ar" is abbreviation for Aramanyak).

For full article on the war, view the Karabakh War article. The modern war over Karabakh began, when, during Gorbachev's policies of Glasnost and Perestroika, Armenians in Karabakh began to express their will to reunite with Armenia. This wish, which had surfaced a few times during Soviet times after Stalin attached this overwhelmingly Armenian territory to Azerbaijan, and drew borders which detached it from Armenia proper came to a head with the government of the Autonomous Oblast of Nagorno-Karabakh voting to unite with Armenia. With massive rallies in Yerevan (in excess of 1 million attendees out of 3.8 million residents in the Armenian SSR), and counter rallies in Baku, things eventually became violent, with full scale war eventually breaking out. Armenians secured military control over most of Karabakh, as well as some surrounding territory before a cease fire was signed in 1994, which has held relatively well ever since. A peace deal has been discussed ever since, with no success. 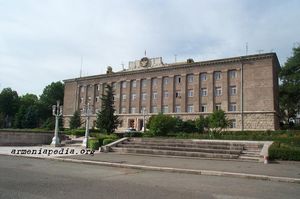