The name "Nagorno-Karabakh" itself seems to attests to the region's tumultuous history. The word "Nagorno" (Нагорный or Nagornyj) is Russian for "mountainous." The name "Karabakh" first appeared in Georgian and Persian writings from the 13th and 14th centuries. Many scholars have come to a conclusion that "Karabakh" (or "Karabagh") is a compound of the Turkic "kara" meaning "black" and the Persian "bakh" meaning "garden." However, Tabriz-born cartography researcher Rouben Galichian raises an interesting note in his book Historic Maps of Armenia: The Cartographic Heritage (pub. 2004, p. 210 ISBN 1860649793):

...there are a number of Armenian places that bear the Azeri prefix of "Kara", which in the modern Azeri language means "black". These include Karabagh (black garden), Karadagh (black mountain), Karakelisseh (black church) and Karasou (black water). The names do not seem logical, since Karabagh is a lush and green region, the mountainous area of Karadagh is not black and certainly Karakelisseh (Monastery of St. Thaddeus) is not black but an all-white cathedral, with a black strip of finishing stone on the rotunda of one of its churches.

According to the paper entitled "Tati and Harzani, two ancient dialects of the Azeri language" by the Iranian linguist Abdolali Karang (Tabriz – 1954/5), the word "kara" is a derivative of "kaleh" or "kala", which in the old Harzani language means "large". This could well explain the meaning of the above names. Karabagh – Large Garden, does look like a huge garden, Karadagh – Large Mountain, is a mountainous region with many large and small mountains and Karakelisseh – Large Church, is indeed the largest religious complex in the area, while Karasou – Large River, is a very wide and shallow river. In the local dialect of the present-day Iranian-Azeri village of Gelin-Ghieh, the word used for large is "kala", and even in Persian the word "kalan" means a large amount, which could have been derived from the same root.

Karabakh is often referred to by the Armenians living in the area as "Artsakh" (Armenian: Արցախ), meaning "Woods of Aramanyak" ("Tsakh" is Armenian for Woods, "Ar" is abbreviation for Aramanyak).

Nagorno-Karabakh appeared under the name "Urtekhe" or "Urtehini" in Urartian cuneiform writings. It eventually became an intregal part of the Kingdom of Armenia as the province of Artsakh, one of fifteen traditional provinces of Greater Armenia. At times, the area was disputed between Armenia and neighboring Caucasian Albania. Additionally, like the rest of Armenia, it was coveted by other regional powers, especially the Persians and later the Arabs. By the medieval era, it came to exist as the principality of Khachen. In the 11th century, the Seljuk Turks destroyed the Armenian kingdom, but the mountainous regions remained relatively unharmed.

In the early 17th century, control of the district passed to Safavid Persia and in the mid-18th century the Karabakh khanate was formed. In the 19th century, the Armenian meliks (princes) of Karabakh appealed to Imperial Russia to liberate their land from Muslim rule. The Russians consented and after the Russo-Persian War of 1804-1813, Karabakh passed to the Russian Empire by the Treaty of Gulistan. The rest of Eastern Armenia became part of the empire after the final Russo-Persian War (1826-1828) by the Treaty of Turkmenchay. In 1868, the Karabakh khanate was dissolved and the area became part of the Elisabethpol Governorate. During the Russian Revolution of 1905, the region saw violence with the Armenian-Tatar massacres.

After the Russian Revolution in 1917, Karabakh fell under the authority of the Special Transcaucasian Committee of the Russian Provisional Government and subsequently the short-lived Transcaucasian Democratic Federative Republic, which soon dissolved into separate Armenian, Azeri and Georgian states. Immediately, Armenia and Azerbaijan clashed over ownership of the territory. The latter sought to conquer it with help from the Young Turks. Despite the fact that Turkey was defeated in the course of World War I, Karabakh was subdued by Azerbaijan, with approval from the Allies interested in the oilfields nearby Azerbaijan's capital, Baku. 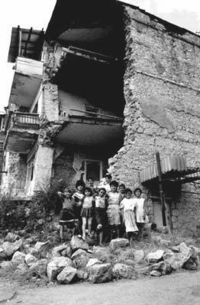 Armenian children standing among the rubble of a building in Stepanakert after its shelling by Azerbaijani forces.

In 1920 Transcaucasia was taken over by the Bolsheviks who made promises they would return Karabakh to Armenia. However, the fate of Karabakh was the ultimately determined by then-acting commissar of Soviet nationalities and future Soviet dictator Joseph Stalin. Needing to appease Kemalist Turkey, Stalin and the Bolsheviks assigned Karabakh to Soviet Azerbaijan as an "autonomous oblast" in 1923.

With Mikhail Gorbachev's policies of glasnost and perestroika in the late 1980s, the question of Nagorno-Karabakh inevitably reemerged. Complaining about a forced Azerification of the region, the majority Armenian population started a peaceful and democratic movement to unite Karabakh with the Soviet Armenia. On February 20, 1988, Armenian deputies to the National Council of Nagorno-Karabakh voted on unification. However, on February 24, a clash ensued between Armenians and Azerbaijanis in Askeran followed by a violent anti-Armenian pogrom in the Azerbaijani city of Sumgait on February 29. Further pogroms and riots broke out in Kirovabad, Baku, and other locations. Soviet MVD troops were deployed in the region to prevent further bloodshed.

In April 1991, Soviet Azerbaijani authorities lauched Operation Ring, an effort to ethnically cleanse Karabakh of its Armenian inhabitants. The operation lead to full scale armed hostilities between Armenia and Azerbaijan. In November 1991, the Parliament of Azerbaijan abolished the autonomous status of Karabakh. In response the Nagarno-Karabakh government held a December 10, 1991 referendum in which the overwhelming majority of the population voted for outright independence.

During the war, the Armenian forces eventually drove the Azeris out of much of the region and seized a strip of land (called the Lachin corridor) linking Armenia and Nagorno-Karabakh, as well as the so-called security zone--strips of territory along the Nagorno-Karabakh borders but inside Azerbaijan which had been used by Azerbaijan artillery during the war. An unofficial cease-fire was reached on May 12th, 1994 through Russian negotiation, and continues today.

For full article on the war, view the Karabakh War article. The modern war over Karabakh began, when, during Gorbachev's policies of Glasnost and Perestroika, Armenians in Karabakh began to express their will to reunite with Armenia. This wish, which had surfaced a few times during Soviet times after Stalin attached this overwhelmingly Armenian territory to Azerbaijan, and drew borders which detached it from Armenia proper came to a head with the government of the Autonomous Oblast of Nagorno-Karabakh voting to unite with Armenia. With massive rallies in Yerevan (in excess of 1 million attendees out of 3.8 million residents in the Armenian SSR), and counter rallies in Baku, things eventually became violent, with full scale war eventually breaking out. Armenians secured military control over most of Karabakh, as well as some surrounding territory before a cease fire was signed in 1994, which has held relatively well ever since. A peace deal has been discussed ever since, with no success.