Stepanakert (55,200p. Ստեփանակերտ, named after Stepan Shahumyan, leader of the 26 Baku Commissars) is the capital of this small country. Tidy and bustling, it makes a good base for local day trips with its central location and choice of hotels and homestays. There is a small museum, a worthwhile shuka, supermarkets, shops, restaurants and cafes. Armenians credit the medieval Armenian settlement of Vararakn as the foundation of modern day Stepanakert. Azeris credit the founding to the end of the 18c, when the khan of Shushi built his winter residence in the place of Vararakn and called it Khanaberd, in a neighborhood still known as Khanen bagh by locals. When the khan conquered the nearby village of Baghin Shen, it was renamed Khankendi, literally meaning khan's village. In 1847 the Russian garrison built barracks here, though it remained in Sushi's shadow until it was chosen as the capital of the Nagorno-Karabakh Autonomous Oblast on October 6, 1923 - the same day it was renamed Stepanakert. The population increased from 3,189 (85% Armenian) in 1926 to over 50,000 today.

Within the borders of today's Stepanakert were also once the villages Nerkin Shen and Soghomonishen, the inhabitants of which moved to Shushi in the middle of the 19c. Traces of the villages with their mills and churches remain. The villages of Hin and Nor Armenavans, Kirkijan and Paghlur also have been incorporated into Stepanakert. The church of Vararakn, the settlement which occupied the central district of the present town, was a three-nave basilica with rectangular scheme. It was demolished in 1930’s. In the 1950 the foyer of Stepanakert Armenian Drama Theatre was built on that church's foundations. Kirkijan village's 16c Surb Astvatsatsin church and the one-nave basilica of Paghlur still stand.

Stepanakert's first general plan was by A. Grigoryan in 1926, modeled after one of Yerevan’s general plan versions by Alexander Tamanyan. Revisions of the general plan in 1938 by Slobatyanik and 1968 by B. Dadashyan left Tamanyan’s principles unchanged. At the heart of Stepanakert is the statue of Stepan Shahumyan, in a circular park built around 1929-30 and known locally as Pyatachok. Pyatachok is adjacent to the important Renaissance Square and forms the hub from which the major streets of Stepanakert radiate. Renaissance Square, built in the 1960s and 1970s, is where some important government buildings are located. One of these, the National Assembly, is housed in the same building as a local Hotel Armenia. Below the square some stairs descend into Lovers' Alley and beyond that to the stadium. From the central square towards the S stretches red canyon, framed by Azatutyun Avenue and Tumanyan Streets, the latter of which goes down from the old part of the town. 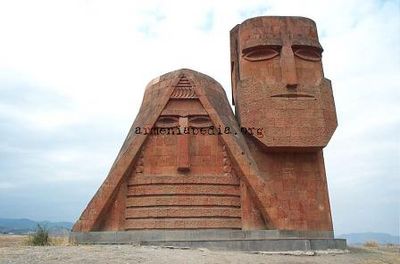 Tatik and Babik, "We are our mountains"

On the N side of Pyatachok circle is a park, and next to that, Azatamartikner Blvd (ie. Freedom fighter's Blvd) heads to the NE. A long and important commercial corridor, it eventually hits a traffic circle which it emerges from as Mesrop Mashtots Ave. Continuing upon Mashtots to the outskirts of town leads to the iconic monument sculpted by Baghdasaryan, "We Are Our Mountains", more commonly known as Tatik and Babik ☆ ⟪39.8371, 46.7699⟫ (Grandmother & Grandfather). This huge stone sculpture of an elderly Karabakh couple located on a small hill symbolizes the union of the people with the mountains they inhabit, as their bodies are meant to be imagined buried deep in the hillside. Beyond this, the highway continues to all parts N.

Heading E from Pyatachok takes you along Sasuntsi Davit Street. Almost immediately on your right will be the small History Museum, with an interesting display worthy of a quick stop. 2 blocks further is the Stepanakert Central Shuka ☆ ⟪39.8172, 46.7575⟫ (farmer's market). The shuka has a very interesting variety of pickled plants, mulberry raisins, pure fruit "oghis" (vodkas), and a number of stalls making the fresh famous local specialty jhengyalov hats. Jhengyalov hats (also sometimes transliterated jingalov hats) is a mix of up to 20 local herbs which are pan cooked in a thin bread wrap. It's Artsakh's signature dish and a must eat while visiting the region.

Heading approximately S from Pyatachok is Vazgen Sargsyan Street. The first few blocks hold the main "downtown" area of Stepanakert, with a new Surb Astvatsatsin Cathedral under construction 4 blocks down (a smaller Surb Hakob church was completed in 2007 in a different district of the city). The parallel Tumanyan Blvd 3 blocks over preserves the bulk of the Stepanakert's remaining historic buildings, and has undergone a lot of investment and renovation. Much of Stepanakert's other historic buildings have been demolished over the years to make way for the Soviet city plan.

In the SW extremity of Stepanakert is the plain single-span Mazi Kamurj ("hair bridge") ⟪39.8076, 46.7675⟫ of 1825, of roughly-trimmed stone with trimmed borders. So-called because the top of the arch was so thin. Built on the advise of Avan Haryurapet (Yuzbashi). Also on the outskirts of town is the Mrakats cemetery, with carved ornamented tombstones, much like those found in the 14-17c cemeteries of Jamilli (Cəmilli, about 2km NW of town) and Gaylatun (Kosalar, about 5km W of S border of town) villages.

35% of the entire population of Artsakh fought in WWII, comprising 45,000 people, with many never making it home. 15,000 received medals and orders, 21 were given the title Hero of the Soviet Union, 5 became holders of several decorations of praise, 23 served as generals, and Armenak Khamperyants (Sergey Khudyakov) served as a marshal of aviation. The huge Monument of Immortality (WWII monument) by architect Y. Hakobyan was built in their honor, and can be found across from the modern hospital by the S entrance to town. In the center is a 21m high obelisk, which divides the monuments into 3 main parts. There are 6 pylons of black tuff with an eternal fire that lights the 1600m2 marble square, and triangle wall barriers dividing the stairs into 5 equal parts, representing the 5 regions of the Nagorno-Karabakh Autonomous Oblast of Soviet times. Exhibits tell the stories of some of the locals who participated in the war.