With the exception of a couple of Shahumyan's important monuments off the highway linking Vardenis in Armenia to Martakert Region of Artsakh, Shahumyan region is not covered in this book. Perhaps it will be covered in a future edition. Please see the book Armenian Cultural Monuments in the Region of Karabakh by Research on Armenian Architecture's Samvel Karapetyan for a thorough treatment of the region. You can download that book for free here: http://www.raa-am.com/raa/pdf_files/136.pdf

In any case, Shahumyan is a very sparsely populated region with stunning nature. It's known best for various hot springs, river canyons, high plateaus and monuments which are worthy of exploration. Foreigners who venture much past the main highway are routinely checked by local police to see whether their paperwork is in order, but this will likely become less common as many new visitors explore this region that was recently made much more accessible by the popular new highway passing through it, completed in 2017 by ArmeniaFund.

Shahumyan Region used to mean the area just N of the Nagorno-Karabakh Autonomous Oblast during Soviet times. The population of that region was 85% Armenian. In May 1991, still very early in the conflict, there was a joint attack by Soviet-Azeri OMON troops called Operation Ring on the Armenian population living in the region, which ethnically cleansed all 24 settlements of the region of Armenians. According to Human Rights Watch the ethnic cleansing was accompanied by systematic and gross human rights violations. After the war, Azerbaijan erased the region from their maps by incorporating it into their Goranboy District, while the Republic of Artsakh, which still claims that region, expanded Shahumyan's borders to include the entire region formerly in Azerbaijan which was called Kelbajar. Kelbajar, which corresponds pretty well to the former Armenian principality of Tsar had become almost 100% Azeri and Kurdish populated by the time of the conflict. So today, de-facto Shahumyan means a completely different territory (Kelbajar) than it did before the war (Shahumyan Rayon of Azerbaijan SSR), and de-facto Shahumyan was not part of the Soviet defined territory of Karabakh.

2. Along the Highway from the Armenian border to Martakert Region 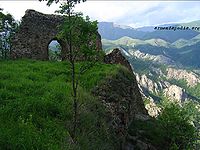 From the border of Armenia you enter the region of Shahumyan and descend along the Lev (Levonaget) River down to where it flows into the Trtu River, which the highway follows past Dadivank, to the border of Martakert Region.

Along the highway you'll pass Nor Karachinar (91p. Նոր Կարաչինար) and Kharkhaput (43p. Խարխափուտ, also Nor Kharkhaput) before reaching Knaravan (Քնարավան), a small village with about a dozen white houses established after the war with the sponsorship of Karapet Harutunian. Knaravan has a Handaberd Monastery less than 1km E of the village, with semi-ruined church, chapel and bell-tower. The real reason to stop however is to hike up to Handaberd Fortress ★80 ⟪40.223516, 46.13723⟫ - an impressive fortress found right above the village with many of the walls intact. With some foundations believed to date to the 5th century, most of the massive walls were built up over the centuries. Go through the village and hike up on your right hugging the hill along a well cleared trail that may eventually grow faint, but continues up to the top. 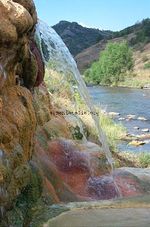 Next up is the destroyed Chapni (0p. Չափնի, Çəpli in Az.) on the N side of the main highway (closed to visitors), followed by Yeghegnut (171p. Եղեգնուտ). Next, one passes the turnoff for Karvachar city - the regional capital (♨ hotsprings further up that canyon), then the turnoff/tunnel into the Tutkhun canyon and the ♨ hotsprings of Zuar ☆55, before coming upon a blue and white sign in Armenian indicating a monastery 400m further down the road on the right. You'll know you've reached the monastery when you come upon a footbridge and a bridge for cars a few dozen meters apart. 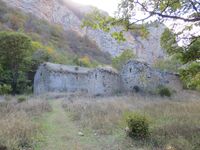 Park and walk to the tucked away 12-13c Surb Astvatsatsin Monastery ☆ ⟪40.171343, 46.25858⟫ (also known as Kusanots Anapat) a few steps away. The medival-period monastery complex includes over 20 mostly roughly-trimmed stone structures and rooms. In the center of the complex is the main church, which stylistically appears to belong to the Late Medieval period. This almost wholly-preserved three-nave basilica is architecturally interesting due to the manner in which the church-vault leans on two pylons and four pre-wall half-pylons. Connected to the S side of the main church is a gavit with an opening in the roof for light. On the N side of the complex is Surb Astvatsatsin Church, a one-nave basilica with vaulted cover. The squared-beam inscription preserves the words “... princess daughter of King Kyurike... in 1174”. Most of the khachkars and inscriptions in the complex are badly damaged, but two other inscribed dates refer to 1178 and 1261. The complex also had a stable, dwelling and communal buildings which are in various states of ruin. 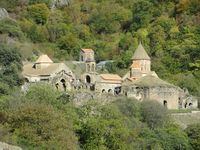 A little more than 2km past Surb Astvatsatsin down the highway is the small hamlet of Vank, more popularly called Dadivank (90p. Դադիվանք) after the impressive 9-13c Dadivank Monastery ★95 ⟪40.161562, 46.288124⟫, a large complex which is undergoing slow but steady reconstruction and renovation work. Two apostles made their way to Armenia after the death of Jesus, one of them was St. Thaddeus. Dadivank is said to have been founded by and named after his disciple St. Dadi, whose tomb was discovered in 2007 under the altar of the main church. Dadivank has also been called Khutavank (Խութավանք) after the once large nearby settlement of Khot (Խոթ), or alternatively because it is built on a hill (khut - խութ). The original temple is long destroyed, and the current expansive monastery was built over a long period from the 9-13c, with different building styles forming a beautiful and harmonious brick-red hued whole. There are small sections of frescoes remaining that give an idea of what once covered the walls.

During the 12c, Mkhitar Gosh lived here while working on his Book of Judgment (Datastanagirg; Դատաստանագիրք), a collection of medieval Armenia's feudal law. These laws were used in the 13c Armenian Kingdom of Cilicia, in 16c Poland for the Armenian communities there, and in the 18c incorporated into Georgian law.

The 13c was a time of prosperity for the monastery. Prince Vakhtang's wife Arzu-Khatun built the main St. Katoghike Astvatsatsin Church in 1214. The gavit of church served as a burial vault for the Principality of Upper Khachen's nobility. Both sides of the window on the S wall of the church have reliefs of the prince's sons Hasan and Grigor, holding a model of the church. But the good times ended and Dadivank was looted by Persians, then Arabs, Seljuks, later by Osman Turks and again by Persians. Over the years much of the monastic wealth was lost, but the final blow was the emigration of Armenians from nearby villages. As an example, 300 families from the aforementioned Khot moved towards the end of the 18c to the province of Yerevan and founded Yengija village (Ենգիջա), with a part of this group later uprooting again and moving to the area of Shulaveri (Շուլավերի), a few kilometers into Georgia. For that reason, by the middle of 19c archbishop Sargis Jalalyans found the monastery lonely and ramshackle. "Those are hiding-places for bandits and robbers of Artsakh district" and they in the traditional sacred placed keep "their animals", and "The large gardens are all destroyed, only the wild fruit-trees grow and multiply".

The church structures are all along the N row of structures, along with gavits, belltowers, an arched passage, and a small covered structure which is open on one side housing two large and impossibly intricate "lace" khachkars. These masterpieces were carved in 1283 by master Atanas (Աթանաս). It is thought that some of the lacework design was literally copied from the lacework of Arzu-Khatun herself. Though they no longer exist, we know from old manuscripts that the altar curtains for Dadivank, Makaravank, Haghpat and Goshavank were made by princess Arzu-Khatun and her two daughters. In fact, Kirakos Gandzaketsi says that Arzu-Khatan even painted the interesting frescos on the S wall of the main church herself.

Within the complex is a wide and clear passage, known in literature as poghota (boulevard).

The S row of structures, many on a lower level or 2 floors, has buildings which served many useful purposes, including monastic cells, guest house, workroom, bookroom, etc. Most of them were built during the years of Zakaryan's rule. In the southwestern part are rooms used by the Hasan-Jalal nobility, on the first floor is a winepress and a cellar.

Excavations of a mausoleum at Dadivank revealed a very unusual burial for Armenian Christianity. The burial of a man seated in a chair. It is now on display at the Stepanakert history museum. 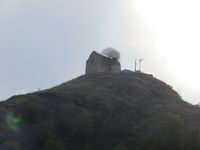 Following Dadivank, you'll pass Nor Yerkej (110p. Նոր Էրքեջ) and finally Charektar (156p. Չարեքտար) before entering Martakert Region. Charektar has a semi-ruined Charektar Monastery on a hill above the left bank of the Tartar River. According to the inscriptions, the main church of Surb Astvatsatsin church was built in 1260. The simple church still stands, though little of the gavit, dining hall or belfry remain. There were once defensive walls, with the vestibule wall once also serving as part of the wall, which had corner half-round towers. Many of the stones have either tumbled down the hill, or were taken over the years to construct houses or other structures. There are khachkars, tombstones and inscriptions. By the northern wall of the church on a stone-block is the inscription “By God’s will this is the letter of Nuradin, that gave (land) Patlanants to Koghtapan for my soul’s salvation. Leader of spiritual friary Hovanes and other brothers gave two days of liturgy on Saint Sargis’ day: one to me and another to Khorishah. The one who takes away the land or protests, will be cursed by 1318 fathers”. There are were numerous gravestones at the monastery. The gravestone of Grigoris the Brave of Tsar province has especially rich decoration.