Winner of the USSR Grand Prix

Rafik Ordyan (Armenian: Ռաֆիկ Օրդյան; Russian: Рафик Ордян; September 25, 1948 – May 31, 1979) was a Soviet-Armenian engineer and handcrafter of automobiles, who designed and built the GT-77 race car which went on to capture 1st place in the 1977 Soviet Grand Prix.

Rafik Ordyan was born in Berd, located in the Tavush region of Armenia to notable painter Sarkis Ordyan and Arevhat Grigoryan. [1] The origin of the Ordyan family was in Ordubad in Armenian Nakhijevan, hence the surname Ordyan, in the 18th century Rafik’s ancestors settled in Aigedzor, in Tavush province. [2]

As a young boy Rafik absolutely loved to read, and could be found immersed in a journal or book almost always. He was particularly fascinated with science and technology, and like many Soviet boys adored reading “Юный техник” (“Young Engineer”), a publication comparable to the style and popularity of “American Boy” (later “Boy’s Life”) in the U.S. Other magazines of which he was a fan included “Техника молодежи” (“Technology of the Youth”), and “Знание – сила” (“Knowledge – Power”). [3] He was also interested in boxing and was involved in a local boxing club in Yerevan, to which he would go with his friends several days a week. [4]

In the eighth grade Rafik had figured out how to build an FM radio from scratch, and with common household products. He produced a number of the gadgets and passed them out to family and friends. They were about the size of a pack of cigarettes.[4] 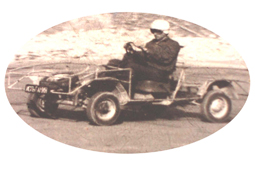 By the age of fourteen his love for engineering and specifically his love for cars was born with a single publication. While reading the journal "Young Engineer", he discovered a vehicle known as the “Юный сибиряк – 62” (“Young Siberian - 62"), a cab-forward, mid-engine light truck, and quickly became obsessed with the idea of building his own hand-made car one day.[3]

While in the tenth grade Rafik partially realized his dream, building a vehicle called a “Buggy-model” which was a convertible and besides being handmade, was the first vehicle of its type in Armenia. [3] After completion the vehicle was donated to friends of his in Berd and having gained valuable hands-on engineering, design and fabrication experience he was ready for his dream car. [5]

Rafik’s attraction to technology led him to the Department of Cybernetics at Yerevan Polytechnic Institute where he was an excellent student who was captivated by physics and dreamt about defending his Master’s thesis in Dubna, the capital of Soviet Physicists. During the final year of his studies Rafik began to design his car, the completion of which would take him six long years. His childhood dream was now becoming a reality. [3]

Career and the GT-77

Rafik with the GT-77

By 1971, the design and construction of the GT-77 were in their beginning stages, and Rafik was experiencing first hand the difficulties of building a car with one’s own hands and from an image in the back of one’s mind. This undertaking proved to him that it takes much more than the knowledge of an engineer, he had to become a smith, welder, plumber and even a chemist also. [3] Once construction had begun, Rafik chose the basement of his home in Arabkir district’s “Kanaker GES” neighborhood as his workshop, down one flight of stairs from his first floor home. It was dark, dusty and had a low ceiling at about 7ft., which for Rafik who was well over 6ft. tall, was uncomfortable to say the least. [4]

In 1973 Rafik went to work for the Soviet Ministry of Transportation (КТБ) in their “experimental department”. Shortly thereafter he was promoted to Engineer, and eventually Lead Engineer. All his time outside of work was dedicated to the car, it took days, months, and years. The doors alone took 6 months to perfect. “I had one goal” he said in a 1978 interview, “to create a modern and original car, that is distinct from all others”. His friends and relatives tried to talk him out of it, believing his strength and patience did not suffice, but he proved them wrong, and they gladly joined him in his endeavor. His friends and colleagues would often be in his shop offering a hand where needed. [3][4][5]

The car began taking shape and though almost entirely handmade, included a 47HP engine from a Czechoslovakian Škoda 1202, and steering gearbox and rear-end from a Soviet Moskvitch 412, which were allowed by the rules of the Grand Prix. The rest of the car, including the frame had to be, and was built custom by Ordyan. He even handmade and threaded his own nuts and bolts for the project. The trunk space, placement of instruments and plush interior added to it’s appeal while placement of engine, low center of gravity and an all-fiberglass body were defining characteristics of the final product. [6]

On July 5, 1975 he married Emma Mailyan with whom he would have two children, world-renowned videographer Arman Ordyan was born in 1977 and Arevik Avedian in 1978. They had met first at the Department of Cybernetics where Emma was also a student, and ironically both later worked as Engineers for KTB. After their marriage Emma would put a great deal of support behind the project, and recalled picking up the sandpaper when it came time to smooth out the fiberglass body whose joints, when finished looked like what was later described by a reporter as “perfect”. [5][7]

In June of 1977 the GT-77 saw the light of day for the first time and took Yerevan by storm. Wherever it appeared this bright orange car which boasted one of the lowest profiles (only 1.05 meters, or 3’ 5”) in the world at the time, attracted crowds of people who marveled at it’s unusual shape and meticulous equipment. But aerodynamics aside, the mere presence of a car with upward opening gull-wing doors and automatic hidden headlights, which would reveal themselves when the ignition was turned on captivated the Yerevanian public. Their reaction to his handmade creation assured Rafik of the success of the car and it’s ability to win in the upcoming Grand Prix. [3][7][8]

Rafik Ordyan (holding open the door) is presenting the GT-77 to Edward Gierek, leader of the Communist party of Poland and Vladimir Kirilin, Chairman of the State Committee for Science and Technology of Poland. Moscow 1977

On August 6, 1977 the Soviet Grand Prix began in Moscow. [7] The event, was also known as Vsesovetskaya Vistavka Nauchno Tekhnicheskogo Tvorchestva Molodyezhi or All-Union Exhibition of Science and Technical Creativity of the Youth and was often abbreviated as НТТМ-77. The Journal “Armenia Today” set the number of vehicles entered in the competition at 2000. The panel of judges consisted of representatives from ЦК ВЛКСМ (Vsesoyuzny Leninskiy Kommunisticheskiy Soyuz Molodyozhi or Central Committee All-Union Leninist Young Communist League) or later Komsomol, Technika Molodyozhi magazine, ГАИ (Guyee or Soviet State Automobile Inspectorate) and others. In the first round of eliminations the vehicles, representing 11 Soviet Republics were judged based on technical and aesthetic aspects of construction including simplicity and reliability of construction and originality and creativity of design. If the vehicles were not hand-built meeting the guidelines for entry they were eliminated. Including Rafik, about 35 of the highest caliber vehicles were chosen to move on to the final round. [8] 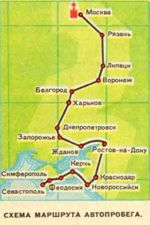 Spectators noticed during the exhibition that a group of designers from the Ukranian Zaporozhets Automobile Factory were making notes of many aspects of the GT-77 but had specifically marveled at the successful arrangement of instruments in the cockpit of the vehicle. Specialists from the Yerevan Automobile Factory were also in attendance and showed great interest in the fiberglass body of the GT-77, said Ordyan “even production specialists can learn something from amateurs”. They would later collaborate with Rafik on fiberglass prototypes for an electric vehicle back in Yerevan. [3][8]

The next and final round of the competition began in Moscow’s Gorky Park. They would drive their vehicles from Moscow to the Crimean Port city of Sevastopol, a distance of around 2,500 miles. [8][7] Along the way the caravan stopped in numerous cities and held exhibitions in city squares. The vehicles were subjected to further tests, including turning radius and even testing vehicle strength by having a person stand on top of them. During the trip a large truck coming in their direction veered towards them and narrowly missed crushing Rafik and his car. By the time they reached Sevastopol Rafik was named “Laureate” of the Soviet Grand Prix and presented with metals and a high-end camera as a prize. From his win in Sevastopol he returned to Yerevan.

In the summer of 1978 Ordyan was invited to return to НТТМ -78 as the previous year’s winner of the Grand Prix. That year 10,000 vehicles were estimated to have entered in the competition, and Rafik spent 2 months abroad proudly displaying the incumbent vehicle.

Not long after capturing the Grand Prix title, Rafik was battling a life-threatening heart condition. One of the best heart doctors in Armenia diagnosed him with a treatable heart condition. Yet other specialists in Moscow insisted otherwise, and prescribed him medications that he was said to have told relatives were killing him. On May 31, 1979 in Moscow’s Botkin Hospital Rafik Ordyan died at the young age of 30. During the autopsy it was discovered that the original diagnosis had been correct. Rafik is buried next to his mother in the cemetery of Navur in the mountains overlooking Berd.[5] 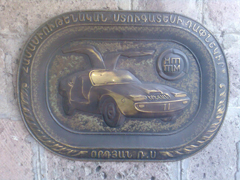 The impact of Rafik Ordyan’s victory in the 1977 Soviet Grand Prix was significant in Armenia. The Yerevan Automobile Factory had planned to mass-produce Ordyan’s GT-77 in Armenia for the Soviet market but decided to scrap the plans after his death. Shortly thereafter the Armenian Autolover’s Club Հայաստանի Ավտոսիրողների Ակումբ was established in Yerevan and membership grew as Rafik’s friends, colleagues and fans carried on the tradition in his memory. After the Soviet collapse, the use and legal ownership of precious metals in the newly independent Republic of Armenia gave way to the creation of a handmade memorial plaque which is given out every year by the Car Club to the best handmade car of the year. The plaque features a center relief of the GT-77 with the name “Ordyan, R.S.” at the bottom. The GT-77 still exists and is part of the Ordyan family collection in Yerevan. As part of the 30th anniversary of the passing of it’s creator a restoration will commence in May of 2009.

Specifications of the GT-77