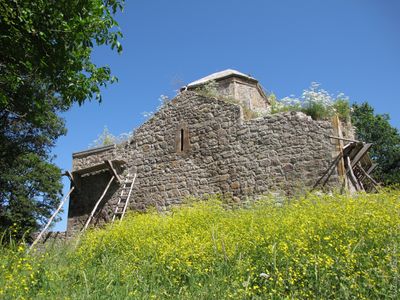 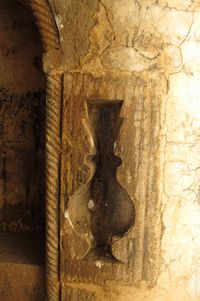 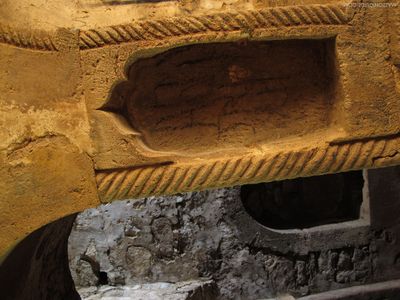 Ptki Surp Gevorg (St. George) Vank is better known locally as Ptkes Berk Vank, hinting at the tall picturesque mountain, on which it is built.

The convent was built in 1263 by Armenian king Ashot's son Shahan-shah, but was reconstructed a number of times. Some think that Hovanes preceptor, whose grave is in northern small chapel, built it and his name is written on the ceiling of the same chapel. Others think that it was built by Hovsep preceptor, but the above mentioned preceptors only reconstructed it.

The main church of the convent has a three-bay layout with two-storied sacristies in the eastern corner. A passage goes from the first storey sacristy to the second, which served as storage space. The prayer hall (8x11.9 m) stands out with restrained and impressive decorations. By this it stands out among similiar Armenian architectural complexes.

The altar area is higher than the level of the hall by 1.5 m. There are no stairs by its sides. The only staircase is from northern bay, an uncommon thing, which other churches don't have. There are khachkars set in the walls and tombstones around.

The underdome passage is quite interesting. It is opened by the crossing point of the arches and doesn't meet in any other cult erection of Gharabagh. The dome is hardly seen from inside, it is low and has an octahedral fan-shaped cover. In front of the eastern side of the church remain the ruins of a building, probably a vestibule. The dining room is situated in southern side of the complex.

According to an inscription it was built in XVI c. It is a longitudinal half-rectangle in scheme erection with vaulted roof. The yard is surrounded with cells and commercial buildings. On the eastern field the cemetery is situated with noteworthy tombstones, inscriptions and decoration stones. There are more than 10 inscriptions on church walls recording its reconstructions and restorations, which date XVI-XVIII cc. A broken inscription of 1347also remains.

The complex was surrounded with a gate of round towers, the small parts of which remain only.