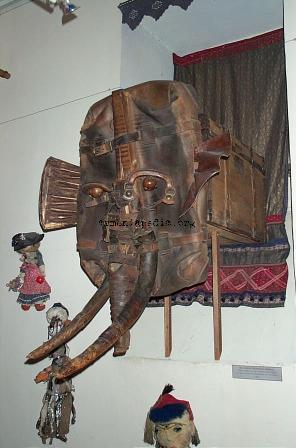 The best museum in Yerevan is small and idiosyncratic, the would-be final home of famed Soviet filmmaker Sergei Parajanov (1924-1990). Though an ethnic Armenian (Parajanian), he was born in Tbilisi and spent most of his professional career in Kiev or Tbilisi. He won international fame with "Shadows of Forgotten Ancestors" and "The Color of Pomegranates," but his career was crippled by imprisonment (for homosexual liaisons) and denial of resources. Under perestroika, Yerevan claimed him as its own, and built him a lovely house overlooking the Hrazdan gorge in an area of ersatz "ethnographic" buildings on the site of the former Dzoragyugh village (just behind and left of the upscale restaurant "Dzoragyugh," commonly but no longer accurately known as the "Mafia Restaurant" due to a leather-clad clientele, a mysteriously reliable electrical supply during the dark nights of 1993-95, and the occasional use of firearms). Alas, Parajanov died before the house was finished, but it became a lovely museum/memorial that also hosts dinners and receptions to raise funds. Parajanov's visual imagination and subversive humor are represented in a series of compositions from broken glass and found objects. His figurines from prison-issue toilet brushes are proof that a totalitarian, materialist bureaucracy need not prevail. Look for "The Childhood of Genghis Khan" and Fellini's letter thanking him for the pair of socks. [Source: RDA]

The museum will host private dinners in the beautiful courtyard, or the museum itself, upon request. The food is excellent, and the hosts are fantastic.