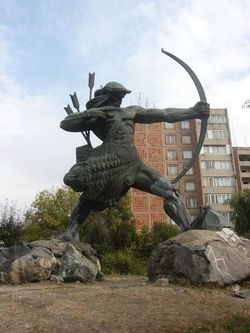 Haik is the legendary patriarch and founder of the first Armenian nation.

Hayk Nahapet (Armenian: Հայկ; also known as Haig; transliterated as Haik) is the legendary patriarch and founder of the Armenian nation. At Dyutsaznamart (Armenian: Դյուցազնամարտ, "Battle of Giants"), near Julamerk southeast of Lake Van, on August 11, 2492 BC (according to the Armenian traditional chronology) or 2107 BC (according to "The Chronological table" of Mikael Chamchian), Hayk slew Bel with a nearly impossible shot using a long bow, sending the king's forces into disarray. His story is told in the History of Armenia attributed to the Armenian historian Movses Khorenatsi (410 to 490 AD). Contents

The name of the patriarch, Հայկ Hayk is not exactly homophonous with the name for "Armenia", Հայք Hayk’. Հայք Hayk’ is the nominative plural in Classical Armenian of հայ (hay), the Armenian term for "Armenian."[2] Some claim that the etymology of Hayq' (Հայք) from Hayk (Հայկ) is impossible[2] and that origin of the term Hay ("Armenian") is verifiable.[2] Nevertheless, Hayk and Hayq are usually[who?] connected to hay (հայ) and hayer (հայեր, the nominative plural in Modern Armenian), the self-designation of the Armenians.

Hayk would then be an aitiological founding figure, like e.g. Asshur for the Assyrians, Indra for the Indians, etc. One of Hayk's most famous scions, Aram, settled in Eastern Armenia from the Mitanni kingdom (Western Armenia), when Sargon II mentions a king of part of Armenia who bore the (Armenian-Indo-Iranian) name Bagatadi ("Theodore").[3]

A connection was made in Armenian historiography of the Soviet era, with Hayasa mentioned in Hittite inscriptions.[4]

Movses gave Hayk's genealogy as follows: Japhet, Gomer & Tiras, Torgom, Hayk, and his descendants as Armanak, Aramais, Amasya, Gegham, Harma, Aram and Ara Geghetsik.[5] Hayk was also the founder of the Haykazuni Dynasty. Some of the prominent Armenian royal houses such as the Bagratuni, Khorkhoruni, Bznuni, Syuni, Vahevuni, Manavazian, Arran among others, had traced their genealogy to Hayk Nahapet. According to Juansher Hayk "..was prince of the seven brothers and stood in service to the giant Nimrod (Nebrovt') who first ruled the entire world as king.[6]" Folklore Hayk and King Bel

“Hayk was a handsome, friendly man, with curly hair, sparkling eyes, and strong arms. He was a man of giant stature, a mighty archer and fearless warrior. Hayk and his people, from the time of their forefathers Noah and Japheth, had migrated south toward the warmer lands near Babylon. In that land there ruled a wicked giant, Bel. Bel tried to impose his tyranny upon Hayk’s people. But proud Hayk refused to submit to Bel. As soon as his son Aramaneak was born, Hayk rose up, and led his people back to the land of his forefathers, the land of Ararat. At the foot of the mountains, he built his home, Haykashen.[7] ”

Hayk defeats Bel with an arrow.

At Dyutsaznamart (Armenian: Դյուցազնամարտ, "Battle of Giants"), near Julamerk southeast of Lake Van, on August 11, 2492 BC[8] (according to the Armenian traditional chronology) or 2107 BC (according to "The Chronological table" of Mikael Chamchian), Hayk slew Bel with a nearly impossible shot using a long bow, sending the king's forces into disarray.

The hill where Bel with his warriors fell, Hayk named Gerezmank meaning "tombs".[9] He embalmed the corpse of Bel and ordered it to be taken to Hark where it was to be buried in a high place in the view of the wives and sons of the king.

Soon after, Hayk established the fortress of Haykaberd at the battle site and the town of Haykashen in the Armenian province of Taron (modern-day Turkey). He named the region of the battle Hayk, and the site of the battle Hayots Dzor[10] [edit] Comparative mythology Further information: culture hero